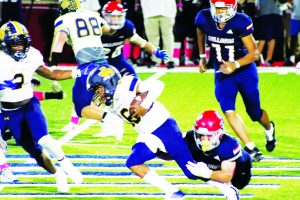 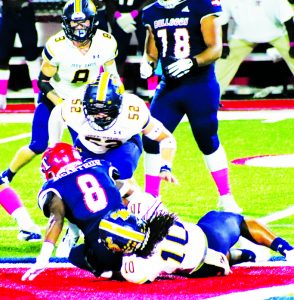 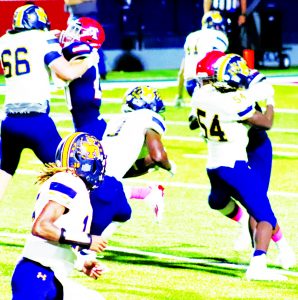 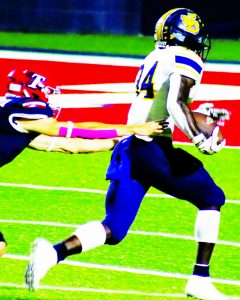 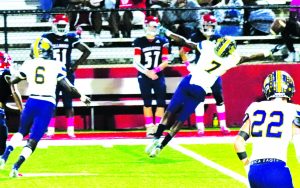 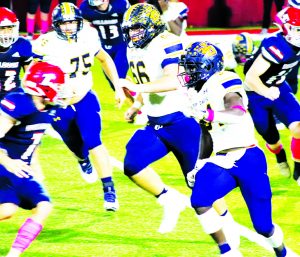 Jeff Davis High dominated Toombs County on both offense and defense last Friday in Lyons as the Yellow Jackets won their eighth straight game 37-8.
Jeff Davis led 34-8 at intermission and coasted through the second half to the victory.
The JD defense held Toombs to minus-6 yards rushing and Aahiyus Allen and Kiyon Dotson combined to pick up 171 yards and three touchdowns on 11 carries.
The Jackets established their dominance from the opening kickoff, racing 66 yards in just four plays. Dotson rolled 24 yards on the second play, and on the third play, Tyson Alls hit Allen for a 36-yd. gain to the Bulldog one. Allen scored on the next play.
On Dotson’s run, the offense ran the play like it was drawn on a chalkboard, as no defender laid a hand on Dotson until he was 20 yards down the field. Kyrese Hunt and Allen kicked out the cornerback, Nate Lewis pulled from his guard position and wiped out a linebacker and C.J. Parker led the downfield blocking for picture perfect execution.
On the pass play, Allen broke open across the middle and Alls delivered a perfect pass. Allen wasn’t touched until he was inside the five.
Angel Mendez kicked the extra point and the Jackets were up 7-0 before the crowd had gotten settled into their seats.
After the ensuing kickoff, the Bulldogs went to the air and got a first down and then had a 2nd-and-1 when things got tough. A pass picked up nothing and then Tre Chandler nailed a runner for a 2-yd. loss and Toombs faced a 4th-and-3 and went for it, completing a 5-yd. pass to move the chains. But after an incomplete pass, Terrance Clemons limited a pass completion to just a yard gain and Dalton Sellers hit the quarterback as he was throwing for another incompletion and the Bulldogs were forced to punt.
Taking over at their 33, the Jackets covered the 67 yards to the goal line in just four plays again. The offensive line cleared out the entire right side of Toombs’ defense and Hunt raced 28 yards untouched until he was finally forced out of bounds. Two plays later, Dotson took the ball up the middle, sidestepped several would-be blockers and raced 35 yards into the end zone.
Mendez booted the P.A.T. and, after just eight offensive plays, the Jackets were up 14-0.
After a 3-and-out, the Jackets took over at their 32 but a penalty pushed them back to the 18. The first play after the punt, the offense put together another picture-perfect execution and Allen darted 77 yards before being pushed out of bounds at the Toombs five. Alls scored a keeper on the next play and, 10 offensive plays into the game, Jeff Davis led 20-0. Mendez made it 21-0.
After an exchange of punts, Toombs completed a pass over the middle but Landon Robertson knocked the ball out of the receiver’s hands. Most players on both sides thought it was an incomplete pass but Chandler and Clemons both thought it was a fumble and both reached to pick up the ball. Chandler got the football, turned and raced 47 yards into the end zone.
After a penalty backed up the extra point attempt five yards, Mendez’ kick missed the mark and the Jackets led 27-0.
The defense set up JD’s next score as Clemons leaped high into the air to pick off a Bulldog pass at the Jacket 32 and returned the pick 63 yards before falling down after running into his own blocker at the Toombs five.
After a penalty backed up the Jackets to the 11, Dotson took the ball around the left side and slipped across the goal just inside the pylon. Mendez kicked the extra point to make it 34-0.
On the last possession of the first half, Toombs finally got its offense working. A 27-yd. completion got the ball to the Jeff Davis 27. Completions of 14 and 12 yards moved the ball to the one and the Bulldogs scored on the next play, just before the end of the half. The run for the 2-point conversion made it 34-8.
Toombs took the second half kickoff and quickly picked up a first down. But a pair of high snaps cost the Bulldogs 23 yards and they finally turned over the ball on downs at the Jacket 42.
On the first play, Parker moved to the fullback position and took the ball around the right side with plenty of blocking and picked up 32 yards to the Bulldog 25. Two more running plays gave JD a first down at the 15. But the drive stalled an Mendez came on to boot a 33-yd. field goal and the Jackets led 37-8.
After holding the Bulldogs on a 4th-down play, the Jackets had another excellent opportunity to score. But a holding penalty and a false start forced JD to punt the ball away.
Toombs had the final possession of the game, moving from their 18 to the Jacket 15 in 12 plays. But with the clock running in the second half, the drive consumed almost all the time on the clock. Miyon Conaway had a 7-yd. quarterback sack in the drive which Toombs quickly overcame with a 33-yd. completion on 3rd-and-long.
A 2-yd. pass moved the ball to the 13, but two incomplete passes left time for just one move play. Clemons broke up a pass in the end zone on the final play of the game.