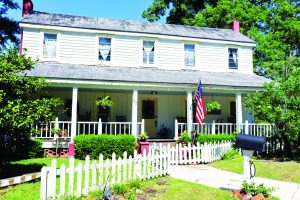 The historic latimer house was mentioned in A.D. Finley’s column 50 years ago

[EDITOR’S NOTE: One of the most read columns in the history of the Jeff Davis Ledger was Perhaps: You Didn’t Know, written by the late A.D. “Arley” Finley. Over the years we’ve received requests to re-run his series of columns. The following column appeared in the Nov. 18, 1971, issue of The Jeff Davis County Ledger.]
By A.D. FINLEY
Several buildings are still standing from back in the early days of Hazlehurst. Among them are:
The Latimer home, on Latimer Street.
The Curry home, which was moved and remodeled, on North Cromartie Street.
The Clark home and hotel, on Railroad Street.
The Clark Hotel, which was first known as the Tuten Hotel, advertised in the Jesup Sentinel as far back as 1844 that it was “a modern place for the traveling man, with a good bed and three meals, for only $2 a day.”
O.W. Clark, the father of Mrs. Henry Bean, operated the hotel for many years and was a pioneer booster of his hometown and community.
[EDITOR’S NOTE: The Latimer home (above), the oldest house in the county, is still standing. It is owned by Robert L. Carter and he and his wife, Kim, reside there.]

Blowing My Top — By Tommy Purser

What Are The Odds? — By John Reed