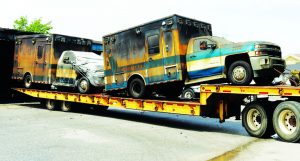 Emergency Medical Services (EMS) Director Roger Ogilvie gave the Board of Commissioners an update on his department at last week’s commission meeting, detailing how the department recovered from the January, 2021, fire that destroyed the EMS building and its fleet of ambulances, the E-911 offices and the Emergency Management Agency office.
At the time of the fire, Ogilvie was in the midst of a 15-day, ventilator assisted stay at Jeff Davis Hospital fighting off the COVID virus. It was days after the fire before he was released from the hospital, with a cylinder of oxygen at his side as he worked to get the EMS back up and running.
He expressed his appreciation to EMS departments in Coffee County and Appling County who loaned ambulances to the Jeff Davis EMS and, during the recovery efforts, the local EMS did not miss any 911 calls.
The EMS set up temporary headquarters in the City of Hazlehurst Fire Department training room where they were welcomed by “great hosts. None of the folks complained about the situation.”
Ogilvie’s department has set up residence in a mobile home on Walnut Street where they do not have the room or privacy they enjoyed at the burned out headquarters.
The department has four ambulances on order but they will not be delivered until October. Ogilvie said that during the last seven months he lost four paramedics with two new paramedics expected to come on full time along with an advanced Emergency Medical Technician.
The commissioners voted to confirm their previous votes to purchase equipment for the EMS.
During the administrators update, County Administrator Oakley Perry handed out the county’s end of the year financial status. The revenues received during the 2021 fiscal year were down over $1,057,000 from the previous fiscal year and county spending was down by almost $750,000, which prompted Commission Chairman Brad Crews to remark that it “sounds like we’ve done a first rate job.”
Perry also discussed the purchase of a utility task vehicle (UTV) for road and pedestrian walkway maintenance at Towns Bluff Park. Ocmulgee Outdoors submitted the low bid of $9,300 and said it would be about a month before the UTV arrives.
In other action, the commissioners ….
…. approved the county’s Georgia indigent defense agreement.
…. tabled action on improvements to Burkett’s Ferry Landing until they can get more information.
…. agreed to apply for a Department of Natural Resources grant for the Towns Bluff Park through the Regional Development Commission.
…. heard a report from County Attorney Andy Ramay who discussed progress on legal work involving several roads in the county.
…. discussed private trash collectors, reemphasizing that companies picking up trash from residences must dump at the city-county transfer station rather than dumping at county dump sites.
…. discussed a recommendation by Commissioner James Benjamin the the late B.H. Claxton be memorialized by naming the fairgrounds in his honor or, at the very least, erecting a plaque in his honor at the site.
…. agreed to a suggestion by Perry that all U.S. flags on county property be lowered to half mast in honor of Sheriff’s Department Investigator Dwayne Kirby who died the previous week with his funeral planned for last Wednesday.