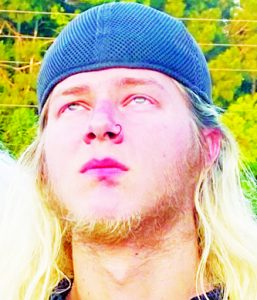 Mr. Logan Lucky Kicklighter, 21, of Soperton passed away June 28.
Born in Vidalia, he was the husband of Taylor E. Millspaugh Kicklighter and the son of Lucky and Shelby Kicklighter of Soperton.
Logan was a graduate of Toombs County High School, Class of 2017 and studied Automotive Mechanics and Technology at Southeastern Technical College. While attending Southeastern, he worked at Willis automotive in Hazlehurst. Logan was presently working as a customer service representative at Lowes Home Improvement in Vidalia, where he was known as “Little Thor” because of his long blond hair.
Logan grew up being a fan of M and Ms, motorcycles and mustangs. At the age of four he started riding dirt bikes which led into racing motocross at an early age. As he matured in the sport he became well respected and corporately sponsored competitor on the racing circuit in Georgia, South Carolina and Florida. He enjoyed riding street bikes and as he became more seasoned his bikes became bigger and faster until he recently purchased a Kawasaki Ninja. He rode countless miles through countless states with friends and with new acquaintances that became lifelong friends.
Logan was a free spirited, deep thinker with a vast knowledge of many topics. He was jokingly referred to as the human Google. He was kind hearted and enjoyed sharing his thoughts, knowledge and life experiences he had gained through research and his walk through life. He maintained a meticulous collection of childhood matchbox cars and was as obsessed with their being kept in mint condition as he was with the upkeep of his motorcycles and recently purchased Ford Mustang.
He is preceded in death by his paternal grandfather, Lewis Kicklighter, his maternal grandfather, Billy Joe Creamer and an uncle, William Amos Barber Jr.
Logan leaves behind his wife, Taylor Elizbeth Millspaugh Kicklighter, Soperton; parents, Lucky and Shelby Kicklighter; sister, Haleigh Hughes (Dalton), East Dublin; brother, Landon Kicklighter, Soperton; paternal grandmother, Suzette Brown, Vidalia; maternal grandmother, Veron Creamer, Hazlehurst; uncles, Luke Kicklighter (Kimberly), Soperton, T.J. Kicklighter, Vero Beach, Fla.; aunts, Mary Sue Gibbs, Surrency, Latrelle Barber, Surrency, Marie Keith (Larry), Springfield; nephews, Case, Waylon and Jenson; several cousins, countless friends and biker buddies.
Services were conducted July 1 in the Williams Chapel of Sammons Funeral Home with the Rev. Thomas Colter officiating.
Logan was laid to rest beside his paternal grandfather in Harmony Baptist Church Cemetery.
Please share a memory, leave a condolence and sign and online guest register at www.sammonsfuneralhome.com
Sammons Funeral Home of Soperton was in charge.