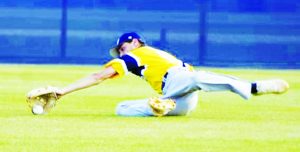 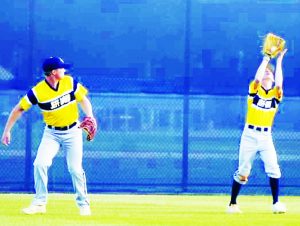 Trenton Clance makes the catch as Matthew White looks on 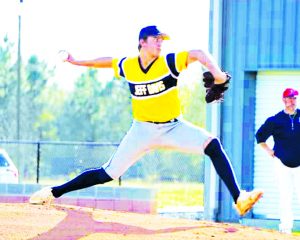 Jeff Davis High’s baseball team opened its Region 2-AA schedule last week, dropping a 3-game series to Toombs County two games to one. In Tuesday’s opener, Toombs won 6-5 in Lyons, in Wednesday’s second game the Jackets won 5-3 in Hazlehurst, and in Thursday’s finale, the Bulldogs took a 7-4 victory in Lyons.
In Tuesday’s game, the Bulldogs scored an unearned run in the bottom of the seventh inning to break a 5-5 tie and win 6-5.
The Jackets led 3-0 after two and a half innings and 4-2 after four and a half, but Toombs used a 3-run fifth to go in front 5-4. JD tied the score in the sixth to set up Toombs’ last-inning rally.
A 2-out, 2-run single by Cason Clance gave the Jackets a 2-0 lead in the second inning. The Jackets got an unearned run in the third to make it 3-0.
In the bottom of the third, the Bulldogs loaded the bases with no outs and got on the scoreboard with a sacrifice fly. The defense then ended the innings with a Ethan Hulett, Cade Walters, Hamp Hayes 4-6-3 double play.
Hayes hit a solo home run in the fifth to put the Jackets up 4-2.
The Bulldogs erupted in the fifth with two singles, a double and a triple to put three runs on the board to go up 5-4.
A leadoff Matthew White single in the sixth, a Trenton Clance sacrifice bunt and a ground out put pinch runner Hayden Turner on third and Turner came home on a wild pitch to tie the game.
Hayes’ homer was the big blow for the Jackets. Matthew Glass had a pair of singles, Cason Clance had a 2-run single, and Ethan Griffin and White added singles.
Alex Mason took the loss in relief. He gave up an unearned run on two hits, walked none and struck out one. Cam Williams started the game, giving up four earned runs on 10 hits, walking one, hitting one and striking out two.
The Jackets jumped on Toombs quickly in Hazlehurst with a 3-run first inning and a 4-0 lead going into the third.
Walters opened the bottom of the first with a 4-pitch walk and went to second on Ethan Griffin’s sacrifice bunt. Williams then singled to score Walters. Glass and Mason had back-to-back run scoring singles to make it 3-0.
Walters led off the second with a double, went to third on a Griffin ground out and scored on a Williams ground out to make it 4-0.
The Jackets stranded runners at second and third in the third and left the bases loaded in the fourth as Toombs closed to within 4-3.
The Jackets’ final run came in the sixth as Griffin and Williams led off with singles. Two outs later, Mason walked to load the bases. Trenton Clance followed with a single to right to score Griffin but Williams was thrown out at home trying to score from second to end the inning.
Williams had a trio of singles and two RBI to lead the offense. Ethan Hulett doubled and singled, White and Trenton Clance both had two singles and an RBI, Griffin singled twice, Walters doubled, and Mason had a single and an RBI.
White threw a complete game 5-hitter. He gave up two earned runs, walked one, hit two and struck out eight.
In Thursday’s finale, the Jackets led 3-1 after 4 1/2 innings but six errors led to the Jackets’ 7-4 defeat.
The Jackets struck first with a run in the third. An error, a walk and a Trenton Clance sacrifice bunt put runners on 2nd and 3rd with one out. Griffin followed with a 2-out run-scoring single.
After Toombs tied the game 1-1, the Jackets started the fourth with a Glass walk, a White single and Mason was safe on an error as JD went up 2-1. After a pair of strikeouts, Trenton Clance singled to make it 3-1.
The Jackets loaded the bases in the fifth with one out but couldn’t get a run in. They loaded them again in the seventh with no one out but couldn’t come up with a hit as a runner scored on a passed ball.
Three free passes and a pair of errors doomed the Jackets in the fateful sixth, as the Bulldogs sent 10 men to the plate to score four runs.
The Jacket bats managed only five hits, all singles. White had two singles, Trenton Clance and Griffin both had a single and an RBI, and Glass singled.
Cole Baucom started on the mound and went four innings. He gave up one earned run on five hits, walked two, hit one and struck out four. Duke Stone took the loss in relief. He gave up three earned runs on two hits, hit two, walked one and struck out none.
Score by innings:
JDHS 0 2 1 0 1 1 0 -5
TCHS 0 0 1 1 3 0 1 -6