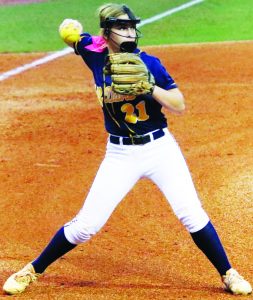 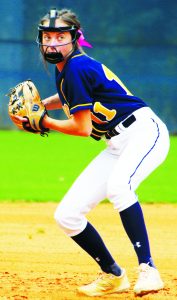 Jeff Davis High’s softball season came to an end last Tuesday as the Lady Jackets lost two of three games to the Lovett Lions in the Elite Eight of the 2020 GHSA Class AA softball tournament. JD finished the season with a 28-8 record. Lovett went on to post a 27-5 record finishing the season as state runnerups to Heard County.
Playing in Atlanta last Tuesday, Lovett won the series opener 5-0, Jeff Davis took the second game 4-1, and the Lady Lions took the third and deciding game 8-3.
In the opener, Lovett’s junior pitcher Peyton Kanaly shut out JD on just two hits, singles by Paige Carter and Tia Cornish. She did not walk a batter and put down 10 Lady Jackets on strikes.
Kesleigh Poe took the loss on the mound, going five innings, and giving up four earned runs on nine hits, walking three and fanning five. Maeleigh Burns pitched the final inning, blanking Lovett on no hits, walking one and striking out none.
In the second game, the Lady Jackets struck first with a 3-run third inning off Lovett starter Ava Vinci. Bianca Torres started the inning with a single, Bentlee Metts was hit by a pitch and Carter singled to load the bases with no one out. Jenna Miles singled to drive in Torres to make it 1-0 with the bases still loaded with no one out. That brought Kanaly back to the mound and Jaci Underwood greeted her with a 2-run line drive to center making it 3-0 with two on and still no one out. Kanaly then struck out the next three batters to quell the uprising.
In the fifth, Miles got her second single of the game, stole second and scored on a Kalleigh Sellers single to make it 4-0.
Lovett finally got to Jeff Davis starting pitcher Kelsey Parlor, who had retired 15 of the first 18 batters she faced, in the sixth with a double and a single to cut the margin to 4-1. And that score held up as the final.
Miles, Underwood, and Torres each had two hits for Jeff Davis. Underwood had two RBI and Miles one. Sellers had a single and an RBI and Carter and Metts both singled.
Parlor gave up one run on five hits, walked one, and struck out six.
In the finale, Jeff Davis got to Kanaly with three runs in the first inning. Carter started things with a single and went to third as Miles was safe on a bunt. Miles stole second, and Sellers followed with a 2-run double to center. With two outs, Ella Wood singled to score Sellers, making it 3-0.
From there on out, Kanaly shut out the Lady Jackets on three hits.
Lovett cut the score to 3-1 in the bottom of the first, and a disastrous 6-run third inning spelled doom for Jeff Davis.
Carter, playing in last game, led Jeff Davis at the plate with a pair of singles. Sellers had a double and two RBI, Wood singled in a run, Annalese Poole had a double and Maeleigh Burns singled.
Parlor started on the mound and took the loss. She threw two innings giving up three earned runs on seven hits, walking two, and striking out none. Underwood pitched 2 1/3 innings, giving no earned runs on three hits, walking two and striking out two. Torres, also playing in her last game, threw an inning, giving no earned runs on two hits, no walks, and no strikeouts. Burns pitched 2/3 of an inning, giving up no runs on no hits, striking out one and walking none.
Score by innings:
JDHS    0    0    0    0    0    0    0    -0
LHS    0    1    0    1    3    0    x    -5