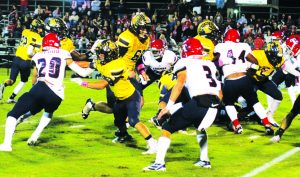 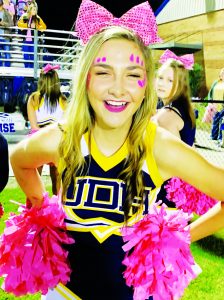 Jeff Davis High School upset 7th ranked Toombs County 35-13 last Friday in Hazlehurst.
The Yellow Jacket defense held the Bulldogs in check most of the evening and limited the visitors to one first down in the first half. It wasn’t until the fourth quarter that Toombs was able to mount a sustained drive.
The win improved Jeff Davis’s record to 6-1 overall and 2-1 in the region while Toombs  fell to 5-2 and 1-1.
The game started slowly with a scoreless first quarter. On their second possession the Jackets marched from their own 45 to the Toombs 11 in eight plays before a holding penalty and a high snap from the Wildcat formation backed them up to the 34. On the next play an interception at the five ended the possession.
After a five yard gain and a six yard sack by James Wood, Austin Wood picked off a Bulldog pass at the 24. On the first play after the turnover, Kiyon Dotson hit a wide open Michael Dotson on a halfback pass for the first score of the game on the first play of the second quarter. Audiel Placencia kicked the extra point to make it 7-0.
On the ensuing kickoff Willie Skipper recovered a Toombs fumble at the Bulldog 20. Five plays later Austin Wood scored from six yards out and the Jackets led 14-0.
After the teams traded punts, Toombs got on the board with a 73 yard pass play. On the extra point attempt a bad snap forced a Bulldog pass which James Wood intercepted to keep the score at 14-6.
After the kickoff Jeff Davis started at their own 20. On 3rd-and-3, Kiyon Dotson darted through a huge hole and raced 64 yards before being pulled down from behind at the Toombs nine. Aahiyus Allen scored on the next play to up the tally to 21-6.
Minutes before halftime the Bulldogs got their first first down of the game but then Andrew Aycock and Chasten Googe combined for a seven yard sack which led to a Bulldog punt. Quarterback Cade Walters then knelt on the ball to run off the remainder of the first half clock.
The second half started with an exchange of punts after which the Jackets took over at their own 32. It took them only four plays to up the tally to 28-6. Allen had a 19 yard run and Austin Wood had carries for 12 and 35 yards, the latter of which was for the TD.
Unable to run the football against the JD defense, Toombs  went to the airways for most of the remainder of the game. Eight and seven yard completions got them their second first down of the game last in the third quarter.
Starting at the 16, Jeff Davis marched to the Toombs 39 before a fumble ended the drive as the third quarter came to the end with Jeff Davis up 28-6.
Toombs began the fourth quarter with its only drive of the game. The drive covered 66 yards in eight plays with a three yard TD run capping the drive. The P.A.T. kick made it 28-13.
The Bulldogs then recovered on onside kick at the Jeff Davis 49. But two plays later Austin Wood tipped a Bulldog pass into the hands of Walters who returned the ball to the Jacket 45 to set up the final scoring drive of the game.
In eight plays, the Jackets found themselves at the Bulldog 19 and on fourth and five Placencia kicked a 37 yard field goal. But a roughing the kicker penalty gave the drive new life at the Toombs 11. On the next play Walters threw to Parker for an 11 yard scoring pass. The kick made it 35-13.
After the defense stopped the Bulldogs on their final possession, Walters knelt on the ball twice to run out the remaining time on the clock.
Score by quarters:
TCHS    0    6    0    7    -13
JDHS    0    21    7    7    -35