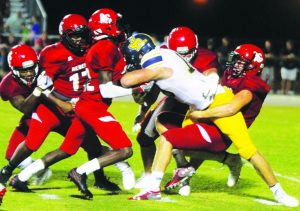 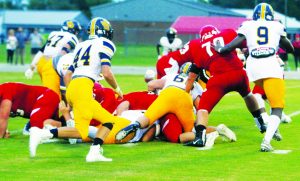 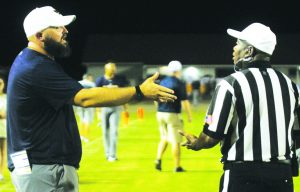 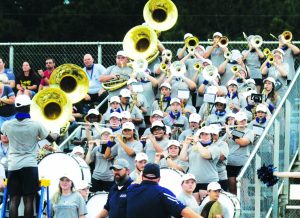 Jeff Davis High overcame a flood of penalties and turned a close first half into a second quarter rout as the Yellow Jackets downed Atkinson County 50-20 Friday in Pearson.
The game got off to a rough start as the Jackets fumbled the opening kickoff just outside the 20 yard line and a Rebel scooped up the ball and returned it all the way to the one yard line. It took Atkinson two plays to get into the end zone and the hosts led 6-0. James Wood blew through the right side of the line to block the extra point.
The second kickoff was better but produced an omen of what would come for the remainder of the half: an official’s flag flew on a questionable call and the Jackets were backed up 15 yards and started their first possession at their 20. After a run got nothing, another flag backed them up to the 15. It took the Jackets seven plays to cover the distance.
Big plays in the drive were a 30-yd. gallop off the right side by Aahiyus Allen, a 16-yd. run up the middle by Wood and the 8-yd. scoring run by Allen. Audiel Placencia kicked the extra point and the Jackets took the lead 7-6.
On the ensuing kickoff, JD was flagged again and Placencia tried an onside kick from the 35 with Atco receiving at the Jacket 47. The Rebels quickly moved to the Jacket 29 where the defense tightened. Freshman Carter Mullis and sophomore Landon Roberson combined to nail a Rebel runner for a 4-yd. loss and the Jackets took over on downs at their own 35.
After a 2-yd. loss moved the ball to the 33, Allen took the ball around the right side and, with guards Nate Lewis and Landon Varnadore clearing the way, he raced 67 yards down the right sideline for the score. Placencia’s kick made it 14-6
The Jackets started their next drive at their own 35 and scored in one play. Austin Wood cut off a block by his cousin James Wood, eluded a tackler and raced 65 yards down the left side for the score. Placencia made it 21-6.
Atkinson came right back rolling all the way to the Jeff Davis two thanks primarily to a 34-yd. scramble by the Rebel quarterback to which a 15-yd. walk-off was added on yet another questionable call. From the 11, Atkinson had four tries but the JD defense held and the Jackets took over at the two.
Another penalty backed up the ball to the one. After getting a first down at the 13, a flag flew again, pushing the ball to the eight. Two plays later, quarterback Cade Walters, starting in place of the injured Conner Rea, hit Allen with a pass out of the backfield and Allen rolled 44 yards to the Rebel 46. After another 5-yd. walk off against the Jackets, a fumbled snap gave Atco the ball at the Jacket 49.
The hosts scored in nine plays to close within 21-12.
On the second play after the kickoff, Austin Wood broke loose again, this time for 57 yards and an apparent TD. But another questionable flag nullified the play and the Jackets ran out the remainder of the first half clock.
It took a while for head coach Lance Helton to make it to the dressing room at halftime as he took a few moments to give the head official a tongue lashing over the first half officiating.
Early in the third quarter, JD safety Willie Skipper intercepted a Rebel pass at the Jacket 40 and weaved his way down the field to score on a 60-yd. return. Walters threw to Allen for the 2-pt. conversion to make it 29-12.
A hustling kickoff squad stopped the Atkinson return man at the Atco 16. And on the first play after the kick, Skipper did it again. For the second time in as many plays, he picked off a Rebel pass, this time at the Atkinson 30 and showed some running back moves as he eluded eight would-be tacklers on his way to the end zone. Placencia booted the extra point and quickly, the Jackets were on top 36-12.
Two possessions later, Peyton Laney broke loose on a 27-yd. scoring run and the Jackets led 43-12, still in the third quarter.
The Jackets next possession came after Isaiah Robinson picked off a Rebel pass at the Jacket 40. With the JD substitutes on the field, Cason Clance took the ball off the right side and raced 60 yards untouched to the end zone. Placencia booted the extra point and Jeff Davis led 50-12.
Atkinson scored a late touchdown and 2-pt. conversion too make the final 50-20.
Score by quarters:
JDHS    21    0    22    7    -50
ACHS    6    6    0    8    -20