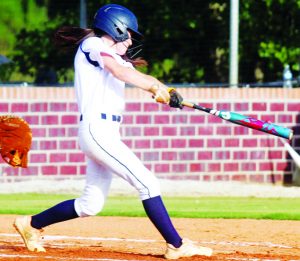 Paige Carter lays down a bunt

Jeff Davis High’s softball team got a trio of wins last week, two of which were against Region 2-AA opponents. In the region games, JD topped Swainsboro 9-1 and Toombs 2-1, both games played in Hazlehurst. Last Wednesday, the Lady Jackets traveled to Telfair County and took a 12-1 victory.
Against Swainsboro, Jeff Davis spotted the Lady Tigers to a 1-0 lead in the top of the first inning and won in six innings, 9-1.
In the bottom of the first, Paige Carter and Jenna Miles opened with back-to-back doubles to tie the game 1-1. After a pair of walks, Bianca Torres flied to left to score Miles. Kelsey Parlor then singled to drive in a run to make it 3-1.
The Lady Jackets scored three more in the fourth. Annalese Poole had a 2-run, bases loaded single to center and Maeleigh Burns singled in another run to make it 6-1.
In the fifth, Peyton Thigpen singled, went to second on a Bentlee Metts sacrifice bunt and scored as Carter reached on an error. Miles singled to push Carter to third and Carter scored as Jaci Underwood reached on a fielder’s choice to up the score to 8-1.
In the sixth, Torres got a one-out triple and scored on an Ella Wood sacrifice fly to end the game by the run rule.
Torres had a double, a triple and an RBI to lead the offense. Miles had a single, a double and an RBI, Carter doubled and drove in a run, Burns and Parlor had a single and an RBI, Poole singled and drove in two runs, Thigpen singled, and Underwood and Wood both had an RBI.
Kesleigh Poe started on the mound and picked up the victory. She went five innings, giving up no earned runs on three hits, walking three, hitting one and striking out three. Parlor pitched the final inning, giving up no hits, no walks and fanning one.
At McRae, Wood was 3-for-3 with three RBI to key the five-inning, 12-1 victory.
Jeff Davis got started quickly with a 5-run first inning.
Carter and Miles opened the inning with back-to-back walks, advanced to second and third, and scored as Underwood doubled to center. Wood’s single pushed Underwood to third and Underwood scored on an error. Wood stole second, went to third on a wild pitch and scored on an Alicia Lilliott sac fly to make it 4-0. Pinch runner Zoe Spencer went to third on the sacrifice and scored as Torres grounded out.
JD got a single run in the fourth, as Thigpen doubled, Tia Cornish walked and a Carter singled to load the bases. Two outs later, Wood singled to score Thigpen.
The Lady Jackets scored six in the fifth inning. Parlor reached on a dropped third strike, Thigpen and Metts singled to load the bases. Carter, Miles, Underwood and Wood then got consecutive singles to up the score to 12-1.
Thigpen, like Wood, was 3-for-3, with one of her hits going for two bases. Underwood had a double, a single and three RBI, Carter had two singles and an RBI, Miles singled and drove in two runs, Metts and Burns both had singles, and Lilliott and Torres both drove in a run.
Burns was the winning pitcher. She threw three innings, giving up one run on three hits, walking two and striking out one. Poe pitched the fourth inning, retiring all three batters she faced, and Parlor pitched the final inning, also retiring all three batters she faced, one by strikeout.
The Lady Jackets couldn’t get their bats going Thursday against Toombs as they managed only two hits. But they made them count in the 2-1 victory.
Poole singled in the second inning, advanced to third on a Torres sacrifice bunt and scored on a Thigpen sacrifice fly.
After Toombs tied the game in the top of the first, Burns led off the bottom of the inning reaching on an error and Laisha Hernandez came on to run for Burns. Hernandez advanced to third on a pair of passed balls and scored as Cornish lined out to center field.
Wood and Poole had the Lady Jackets’ two hits and Thigpen got the only RBI.
Poe threw a five-hitter, walking two and striking out six.
Score by innings:
SHS    1    0    0    0    0    0    -1
JDHS    3    0    0    3    2    1    -9