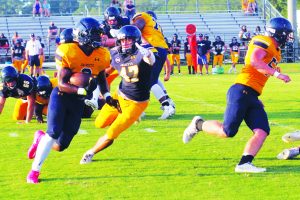 Jeff Davis High’s football season gets underway this Friday night in Lincolnton as the Yellow Jackets face perennial Class A power Lincoln County in Larry Campbell Stadium, named for one of the winningest coaches in Georgia high school history.
Coach Lance Helton and his staff have worked through the difficulties of the COVID-19 pandemic and thus far have kept their charges from being infected.
The Red Devils of Lincoln County have a new coach in Lee Chomskis who was highly successful during his 13-year stay at Vidalia High School. With Chomskis at Vidalia, the Indians were 11-0 against Jeff Davis High.
Taking over the position of Yellow Jacket assistant head coach will be Brian Lawson as Greg Nail will be jayvee head coach and offensive line coach. Lawson will concentrate on the wingback positions.
Austin Oliver is the new offense coordinator and will also coach quarterbacks and fullbacks.
Jay Cravey brings a wealth of head coaching experience to the staff as he takes over the defensive coordinator job, coming to Jeff Davis from Vidalia where he was an assistant to Chomskis. He will be inside linebackers coach.
Special teams coordinator/defensive back coach will be Kade Poole and Izell Stephens returns to the staff as Co-offensive coordinator.
JDHS grad Tyler Williams returns as academics and outside linebackers coach.
Stan Rush will coach the defensive line, Justin Kilpatrick will be middle school head coach and Jeff Weems returns as the team trainer.
The Yellow Jackets lost a lot of starters to graduation last year but return a good nucleus for the 2020 season.
Senior Conner Rea will be at quarterback replacing graduated four-year starter Britt Metts.
A freshman will line up at fullback as Kiyon Dotson won the job in his first year as a Yellow Jacket.
Both wingbacks are returning starters as senior Austin Wood and junior Aahiyus Allen will return at those positions.
The line will be anchored by junior center Conner McLoon, with senior Chaston Googe and junior Nate Lewis returning as starters at the guard positions, although it was questionable as to whether Lewis will be able to play Friday. And seniors Andrew Aycock and Charles Stegall give the Jackets some heft at the tackle positions.
Junior tight end Matthew Glass is a returning starter at that position and junior Tyson Alls, who saw a lot of action last season, will be at split end.
Aycock and Stegall will stay at the tackle positions when the defense hits the field bringing a lot of experience to the position. Senior James Wood returns at defensive end while junior Miyon Conaway will be at the other end.
Inside linebackers will be Austin Wood and Carter Mullis, another freshman starter up from the middle school.
At outside linebacker was be returning starter junior Tre Chandler but he’s out for the Lincoln County game. Senior Cade Walters will return as a starter at outside linebacker.
At the cornerback slots will be junior C.J. Parker and Alls who started at that position last season. Junior Willie Skipper will hold down the free safety position.
Walters will do the punting, senior Audiel Placencia returns as the placekicker, Glass will be the long snapper and Walters will hold for Placencia on placekicks.
Senior offensive lineman/defensive end Adrian Alexander is out for the Lincoln County game.