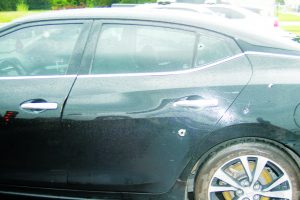 This vehicle was riddle with a half dozen bullet holes, with most of the rounds going into the driver’s side of the vehicle and exiting on the passenger’s side. Miraculously, no one was hit. Hazlehurst Police Department Investigator David Moore said a total of five vehicles were hit by gunfire, and officers recovered shell casings from several different caliber weapons, indicating multiple shooters were involved in the incident. 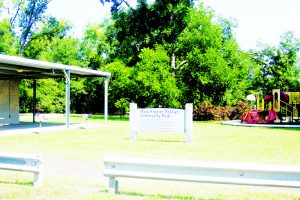 “It’s a dang thousand wonders that nobody was hit.”
That’s what Hazlehurst Police Chief Ken Williams said about a early Sunday morning shootout at Mary McLean Park on Young Street in Hazlehurst.
Five vehicles were shot along with a nearby residence and Antioch CME Church on Dr. Martin Luther King Drive next to the park.
According to Williams, a Saturday night block party at the park lasted until just after midnight when the shootout began. During the party, some people from Appling County came to Hazlehurst to join in the festivities and two females got into a physical altercation. One of the females, who was from Appling County, got stabbed.
That’s when several people pulled out firearms and the shooting began.
Investigators are not sure how many people were involved in the shooting but Williams said  investigators recovered several different caliber shell casings from the scene.
“It was everything from 9 mm, to 45, to 40, to 223 rounds,” Chief Williams said.
As of Tuesday morning, investigators still weren’t sure of the identities of all the shooters but there are suspects. Williams said the two females involved in the altercation have been identified and will be charged.
In the meantime, Mayor Bayne Stone ordered all the city-owned parks in Hazlehurst to be closed from dusk to dawn and the matter is expected to be discussed next Monday at the City Council’s work session.
“We’re definitely going to discuss it at Monday’s meeting,” Chief Williams said, “and some of the residents in that area want to come to the meeting, too.”
In the meantime, Williams said anyone caught at any parks after dusk will be cited for violation of a city ordinance.

Seven new Hall of Famers to be inducted

Board has called meeting