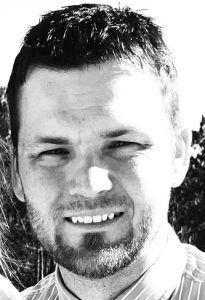 Mr. Michael Allen Perry, 39, of Hazlehurst, passed away July 3.
Mr. Perry was born Jan. 1, 1981, in Hazlehurst. He was a member of First Baptist Church and was a territory sales manager for AgraMed. Michael had a deep-rooted love for the outdoors but nothing compared to the love he had for his family.
He is survived by his wife, Jaymie Beth Perry of Hazlehurst; two daughters, EmiJay Elizabeth Perry and Annelise Jennings Perry. Michael and Jaymie Beth are expecting their son, McPherson Allen “Mac” Perry in November. He is also survived by his parents, Ernest Maxwell “Mackie” Perry and Phyllis Perry of Baxley, his brother, Kevin Joseph (Natalie) Perry of Baxley and several nieces and nephews.
In lieu of flowers, the family asks that contributions, in memory of Michael, be made to First Baptist Church of Hazlehurst Children’s Ministry, 30 Tallahassee Street, Hazlehurst, Georgia 31539
To sign the online register book, visit www.wainrightparlor.com
Wainright Parlor Funeral Home has charge.