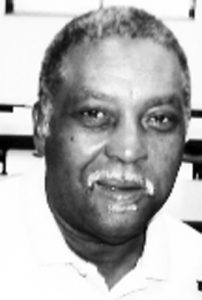 Graveside services for Mr. James Wesley Moore Sr. (J.W./Jap), 78, a resident of McRae, who died May 4 at Navicent Health in Macon, will be Saturday, May 9, at 1:30 p.m. at Davis Chapel Missionary Baptist Church Cemetery in Towns, Ga. Visitation will be Friday, May 8, from 4-6 p.m. at Kings Brothers Funeral Home in Hazlehurst.
Mr. Moore, the son of the late John Henry Moore (Yank) and the late Viola Outlaw Moore was born Dec. 27, 1941. He was the fifth of six siblings; four of which preceded him in death. He joined Davis Chapel Missionary Baptist Church at an early age. He served as a ward man, choir member, treasurer and deacon and was a faithful member. James was also the lead singer of The Kings of Harmony for several years. On Jan. 3, 1966, Mr. Moore married Mrs. Barbara Davis Moore and they had two sons. He retired from Amoco Fabrics as a supervisor after more than 31 years of service, was a retired farmer and raised livestock until his health failed. He was a member of Georgia Cattlemen for many years.
He leaves to cherish his beautiful memories, a devoted wife, Barbara D. Moore; sons, Andre Wesley Moore (Lesia) and James Wesley Moore Jr.; granddaughter, Kayla Moore; sister, Louise M. Young and a host of nieces, nephews, cousins, and friends.
Condolences may be made at www.kingbrothersfh.com
King Brothers Funeral Home was in charge of arrangements.