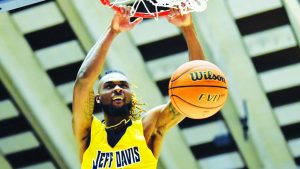 [EDITOR’S NOTE: The following article appeared on Murray State College’s Racer Athletics web site. The photo is by Hyosub Shin of The Atlanta Journal Constitution]
Murray State men’s basketball incoming freshman, Ja’Queze Kirby, is set to join the Racers this summer to begin preparations for the 2020-21 season.JaQueze Kirby
Kirby, 6-6 forward out of Hazlehurst, Georgia, played for Coach Bo Boatright at Jeff Davis High School.
As a senior in the 2019-20 season, Kirby had a stat line of 19.4 points per game and 11.6 rebounds per game. Additionally, he averaged 4.8 blocked shots per game, 4.1 assists and 2.9 steals. He recorded 17 double-doubles and three triple-doubles and finished with career totals of more than 2,000 points and 1,500 rebounds.
With his prep career behind him and life in Murray State navy and gold in front of him, Kirby leaves a legacy at JDHS that includes him being a four-time All-State selection by the Georgia Basketball Coaches Association and back-to-back 2A Player of the Year awards. The Atlanta Journal Constitution also named him its 2A Mr. Basketball in Georgia.
Kirby told GoRacers.com, he’s looking forward to playing for Coach Matt McMahon and the Racers.
“The coaches showed me they really wanted me on their team and I felt like it was a place that I wanted to be at,” Kirby said. “When Murray State offered, Coach McMahon called me himself. I’m looking forward to being a part of that family.”