Braydon Creech lasy down a bunt – Photo by Angie Hulett 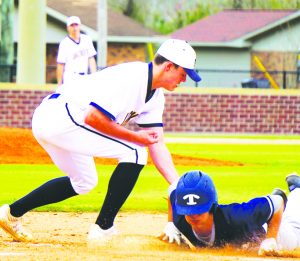 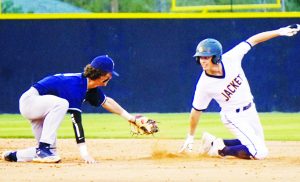 Class 6A Brunswick High cancelled its March 13 game with Jeff Davis High, so the Yellow Jackets hurriedly scheduled at game with Class 4A West Laurens. The Raiders came to Hazlehurst with a 5-2 record, averaging almost six runs a game.
But against the Jackets’ stingy pitching staff, the Raiders could manage only one run and fell 8-1 to JD. Jeff Davis pitchers have now given up only nine runs in the last seven games. The win upped Jeff Davis’ record to 7-4.
The Jackets had one of their best games of late at the plate with nine hits while the Raiders could manage only four. West Laurens’ run came on a fourth inning home run.
Jeff Davis’ runs came in spurts with a pair of 4-run innings.
In the second, walks to Bubby Chaney and Jashaun Kirby, and a Garrett Taylor bunt single loaded the bases. Then Cade Walters walked to give the Jackets a 1-0 lead. Kirby scored on a Britt Metts ground out and Garrison Miles followed with a 2-run single to make it 4-0.
A leadoff homer in the fourth cut the lead to 4-1.
In the fifth, after a walk to Miles, Caleb Leggett doubled to left to put runners at second and third. Hamp Hayes then doubled to center to put two more runs on the board, making it 6-1. Chaney, Kirby and Taylor followed with consecutive singles to push two more runs across the plate, making it 8-1.
The JD defense turned a pair of double plays with Braydon Creech on the mound. In the third, after a 1-out single. the next batter hit a grounder to Creech, who threw to Miles at second and Miles threw to Chaney at first to complete the double play.
In the next inning, after Creech gave up the leadoff home, he walked the next batter and, after a sacrifice bunt, walked the next batter to put two on with only one out. But the next batter hit a sharp grounder to Walters at third, who stepped on the bag and threw to Chaney for a twin killing, ending the inning.
Hayes had a double, a single and two RBI to lead the Jackets at the plate. Taylor had a pair of singles and an RBI, Miles had a 2-run single, Leggett and Colby Marchant doubled, Kirby had a single and an RBI, Chaney singled, and Metts and Walters both had RBIs.
Matthew White started on the mound and went two innings. He blanked the Raiders on two hits, walked none and struck out one. Creech threw the next two innings, giving up one run on two hits, walking two and striking out none, and Miles picked up the win, going the final three innings without giving up a hit, walking one and striking out three.
Score by innings:
WLHS    0    0    0    1    0    0    0    -1
JDHS    0    4    0    0    4    0    x    -8