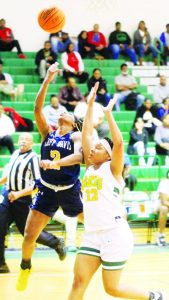 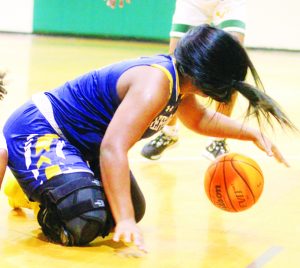 Jeff Davis High’s girls and boys basketball teams’ seasons came to an end last week in the opening round of the GHSA Class AA State Playoffs.
The JD girls fell 48-20 to Josey Friday night in Augusta while the boys dropped their game to Laney 64-44 Saturday night, also in Augusta.
The Lady Jackets stayed close to Josey in the early going but the Lady Eagles’ zone press gave Jeff Davis fits from there on out.
Joseytravels this week to Atlanta to face Douglas High. Douglas defeated Rabun County 44-42 last week. The JD girls ended their season with a 19-10 record.
The first half of the boys game was a close affair as a late 3-pointer by Laney just before the half gave them a 27-24 lead at intermission. In the second half, the Wildcats looked like a different team, forcing a few Yellow Jacket turnover that swung the momentum in Laney’s favor.
Laney will travel to Therrell (22-7) in the second round this week after the Panthers eliminated Putnam County 78-57. The Jackets finished their season with a 19-9 record.
In other action involving Region 2-AA teams, Region champion Vidalia girls rolled over Jefferson County 68-27, No. 2 seed Bryan County fell to Butler 48-54 and No. 4 seed Metter was routed by Laney 77-30.
In boys play, Region champion Swainsboro downed Jefferson County 72-52, No. 2 seed Vidalia fell 60-56 to Butler and No. 4 seed Woodville-Tompkins lost to Glenn Hills 72-58.
In this week’s action, the Swainsboro boys will host South Atlanta, a 60-44 winner over Social Circle and Vidalia’s girls will host Banks County, a 56-53 winner over South Atlanta.