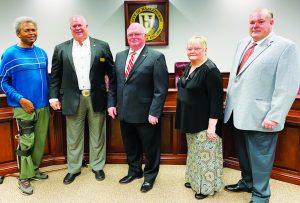 By
MARY ANN ANDERSON
At its first meeting of the new year, the Hazlehurst City Council welcomed Ward 3’s Diane Bass Leggett, its newest member, in an early morning swearing-in ceremony. Almost immediately afterward, the council gathered in a called meeting to discuss the 2019-20 budget before going into closed session to discuss personnel.
Even though the full council was present, only Mayor Bayne Stone spoke in the public portion of the meeting, starting off by saying that the City has had financial “challenges” throughout 2019, and that even more challenges face the city for the remainder of the fiscal year.
“We’ve blown our budget,” Stone said, “and mid-year is the appropriate time for making any amendments and adjustments necessary to keep us in a balanced budget.”
Stone explained the financial crunch by saying that the City had “wisely” bought property in the block on which City Hall sits, including Dr. Sidney Johnson’s old office building that is now leased to Dr. Jeffrey Butler. Stone also pointed out that the City purchased two additional office buildings in that same block, with one leased out while the other remains empty because it is, in his words, “in bad shape.”
“One of the reasons we haven’t been able to do that is that funds and budget busts have kept us bound to what we could do and could not do,” he explained to the council.
The mayor also reeled off other expensive projects that the City has undertaken, including the building of the new Georgia State Patrol post, the installation of the new traffic signal at the intersection of Highway 341 North and North Miller Street, and the construction of the taxiway at Hazlehurst Municipal Airport. Portions of these projects have been funded with federal and state grants, the City’s matching funds and loans.
“In doing all that and making all the decisions,” he began, “and on behalf of the full council in 2019, even though we stuck our neck out, and we sort of have been partly responsible for blowing our budget and exceeding and using a lot of our reserves, I think we made the right decisions.”
On the other hand, Stone reported, the Water and Sewer Department through the years has “always, always” made money, so in that respect the City has been able to, as he said, “acquire and hold fund balances and keep some reserves.”
Just before going into closed session with the full council and City Attorney Ken W. Smith to discuss what he termed as “some problems in our personnel,” Stone said that the City had to look into expenses and budgets of each of its departments, as he didn’t want “to hit the end of our fiscal year sometime in June with our situation not being handled.”
Part of the formalities of first-of-the-year general housekeeping duties of the council is to rehire all employees, a move required by the city charter.
When the council returned from the closed session, Stone again was the only one who spoke. He asked for the meeting’s sole motion, which was not to rehire all employees in light of the budget deficits at the mid-year mark because it’s not in the “best interests” of the City. He added that the employees who would not be rehired would be notified at a later time.
As her first official act as a council member, Leggett made the motion with Ward 1’s Dywane Johnson seconding. With Stone and Ward 4’s John Bloodworth voting yes and only Ward 2’s John Ramay opposing, the motion passed, and the meeting quickly adjourned.