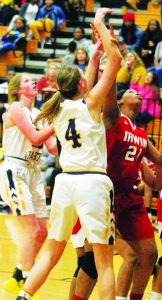 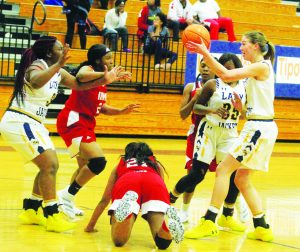 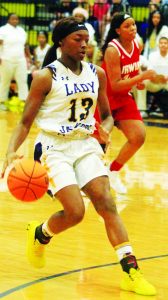 Jeff Davis High’s Lady Jacket basketball team unveiled a swarming, relentless defense last Saturday night in the team’s season opener as they routed Irwin County 56-10 in the Hugh McBride Tip-Off Classic in Hazlehurst.
And in Monday’s second round, Jeff Davis rolled to a 46-18 victory over Long County.
The Lady Indians of Irwin County were completely stymied by Coach Niki Perry’s squad’s defensive prowess as they were held scoreless in the first quarter, and Irwin’s Imari Adams made four free throws late in the second quarter to keep the Lady Indians from being held scoreless for the entire half. At intermission, Jeff Davis led 30-4.
In the third quarter, the Lady Indians got their first field goal of the game from Mikyla Ross. But that was the only shot they made from the field for the entire night. They added four fourth-quarter free throws for the 10-point total.
Meanwhile, Perry’s charges built a 46-6 advantage after three quarters and the Lady Jacket bench got plenty of playing time for the remainder of the game.
Senior Dee Wooten led the JD offense, scoring 16 points in the first three quarters before watching from the sidelines for the remainder of the game. Sophomore Bryce Williams chipped in 10 points to give Jeff Davis two players in double figures. Eight players scored for JD. Jakhia Greene had seven, Tia Cornish and Jekiya Smith six each, Keke McDuffie five, Morgan Yearty four and Tania Hall two.
The Long County game started off like it would be a close game as Long trailed only 11-7 at the first stop.
But the Lady Jackets took an 18-2 advantage in the second quarter to blow the game open with a 29-9 halftime lead. Seven different Lady Jackets scored in the 18-point second quarter.
The lead grew to 43-15 after three with the scoring spread out between six players and, again, the Lady Jacket bench got some valuable playing time the rest of the way.
Wooten and Yearty scored seven and eight points respectively in the first half to build the big lead. Both ended the game with 10 points.
Again, eight players scored. Cornish and Smith had six each, McDuffie five, Williams and Greene four each, and Analese Poole one.
Score by quarters:
ICHS 0 4 2 4 -10
JDHS 14 16 16 10 -56