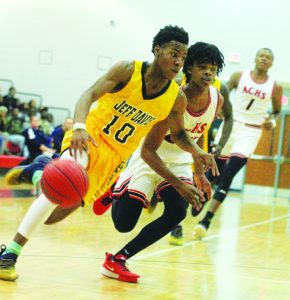 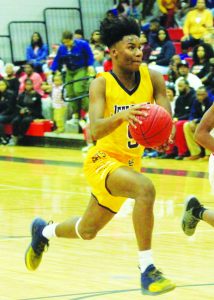 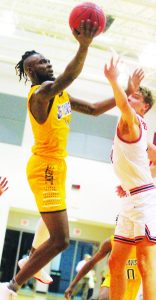 Senior Ja’Quez Kirby, junior Ti King and sophomore C.J. Parker proved to be a formidable threesome for the Jeff Davis High basketball team in three victories last week.
Parker poured in 26 points last Tuesday in an 82-64 win over Toombs County, King tallied 26 Friday in an 87-66 win over Metter, and Kirby scored 25 points Saturday in a 68-55 win over Appling County.
For the week, Parker totaled 65 points, Kirby 62 and King 56.
Playing Toombs in Hazlehurst, all three were in double figures — 26 for Parker, 18 for Kirby and 13 for King.
The game was close at halftime, with JD holding a 36-31 lead, but the Jackets pulled away in the second half to win by 18.
Bran Swain and Brandon Sturgis came close to giving the Jackets five players in double digits with nine points each. Carson Galbreath, T.J. McMillan and Tre Chandler scored two each and Mike Dotson one.
The Metter game was a blow-out from the start with the Jackets pouring in 30 points in the second quarter alone to take a 51-30 halftime lead. By the end of the third quarter the lead was 29 at 74-45 and Metter closed the gap in the final eight minutes.
King had 26, Parker 20 and Kirby 19, 12 of which came in the second quarter along with a pair of 3-pt. shots. Dotson added six, Swain, Galbreath and Sturgis four each, and McMillian and Aahiyus Allen two apiece.
The Appling game started slowly for the Jackets as the Pirates held a 13-11 lead at the first stop. But by the end of the third quarter, Jeff Davis led 58-37 and coasted to the win.
Kirby had 25, including four 3-pt. shots and a half dozen or more dunks. Parker scored 19 and King 17.
Rounding out the scoring were Sturgis with three, and Swain and Dotson with two each.
Score by quarters:
TCHS 8 23 17 16 -64
JDHS 17 19 24 22 -82