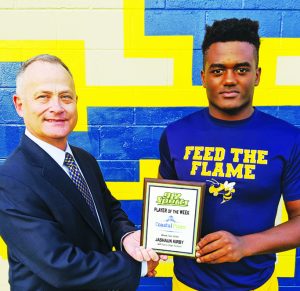 By Kevin Price
912 Sports will name a Coastal Pines Technical College (CPTC) Player of the Week each week during the 2019 high school football season. The winner of the week 10 CPTC Player of the Week Award is Jashaun Kirby, a senior running back from Jeff Davis High School.
Kirby has had several big games for Jeff Davis this season, but the senior running back had an especially good one as the Yellow Jackets pulled off an upset of Swainsboro. The 205-pound running back carried 18 times for 178 yards and two touchdowns as the Yellow Jackets knocked off the then-sixth-ranked Tigers 21-14 on Senior Night in Hazlehurst to keep their playoff hopes alive in ultra-competitive Region 2-AA.
“Jashaun played like a young man who was determined against Swainsboro,” said Jeff Davis coach Lance Helton. “He had a very special night in multiple phases of the game and he really rose to the occasion.”
Kirby’s first touchdown in the game came on a 42-yard run after the Yellow Jackets recovered a Swainsboro fumble. His long run made it 15-0 in favor of Jeff Davis. The Yellow Jackets were leading 15-14 with about seven minutes left when Kirby finished off a scoring drive with a 1-yard run that made for the final score. Helton noted that while Kirby is a standout player on the field he is also a standout in other ways, too.
“He is a special player, but he is also a special young man,” Helton said. “I admire Jashaun’s love for the game of football and his belief in Jeff Davis County. He is the type of young man I want my son to be.”
Players of the Week Week 0 – Jermaine Brewton (Pierce County, Quarterback) Week 1 – Logan Watson (Camden County, Quarterback) Week 2- Tyler Morehead (Clinch County, Quarterback) Week 3 – Trey Cloud (Toombs County, Quarterback) Week 4 – Dionte Bowens (Liberty County, Quarterback) Week 5 – Tony Bethea (Ware County, Defensive Lineman) Week 6 – Trent Johnson (McIntosh County Academy, Running Back) Week 7 – Nathan Vickers (Richmond Hill, Defensive Lineman) Week 8 – Dawson Thomas (Brantley County, Defensive Back) Week 9 – Thomas Castellanos (Ware County, Quarterback) Week 10 – Jashaun Kirby (Jeff Davis, Running Back)