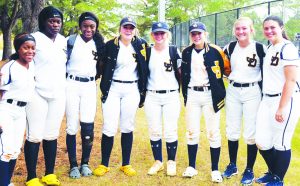 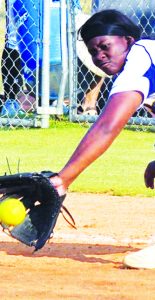 Paige Carter can’t get to this grounder

Jeff Davis High’s softball team saw its season come to an end last week at the Class AA State Tournament in Columbus. But the Lady Jackets didn’t go easily, falling in close games to Lamar County and Bremen, both by 4-1 scores.
Bremen continued through the losers bracket, defeating Lamar County in the quarterfinals 3-2 then knocking off No. 3 ranked Rockmart in the semifinals to get to the finals against No. 1 ranked Banks County. Banks led Bremen 2-1 through four innings Saturday before rain halted play. The teams met Monday at 6 p.m. at Banks County to resume play, and Banks pulled away to a 6-1 vic.
The Lady Jackets finished their season with a 19-16 record.
In the Lamar County game, the Lady Trojans started quickly, scoring three runs in the top of the first inning with a walk, three consecutive singles and a sacrifice fly.
But from there, pitcher Kesleigh Poe did not give up a hit until Lamar’s Cayla Bishop added an insurance run in the top of the seventh on a home run over the center field fence. Poe left the game, yielding to Cara Edwards, with one out in the fifth inning and returned to the mound with two outs in the sixth.
But the 3-run first sealed JD’s fate.
The Lady Jackets’ run came in the bottom of the first as Fefe Greene drew a lead-off walk, went to third on a Paige Carter single and scored as Dee Wooten grounded out to second.
In the third, Lamar got back-to-back one-out walks but Carter took a grounder, stepped on second and threw to Wooten at first for a double play.
In the fifth, Lamar again got two runners on with one out with a walk and a single. But third baseman Jakhia Greene fielded a grounder, stepped on third and threw to Wooten at first for another double play.
Carter’s first inning single was the only hit the Lady Jackets could muster and Wooten had the only RBI. Lamar pitcher Brinkley Yevak issued only one walk, to Fefe Greene to lead off the bottom of the first inning.
Poe pitched 5 2/3 innings, giving up four runs on four hits, walking four and striking out one. Edwards pitched 1 1/3 innings, blanking Lamar on two hits, no walks and no strike outs.
As in the Lamar game, Bremen scored early, with a single run in the first, two in the second and one in the third, to take a 4-0 lead.
The first inning run was unearned as a walk, a single and an error gave Bremen a 1-0 lead.
A walk, a double and a single got the Lady Devils their two runs in the second. Poe came on to relieve starting pitcher Kelsey Parlor in the third and gave up a single, a pair of walks and another single as Bremen went up 4-0.
From there, Poe scattered a trio of singles and held Bremen scoreless.
The Lady Jackets had their chances. In the second, a Georgia Roberts 1-out single and a sacrifice bunt by Allie Lytle put Roberts in scoring position. Alicia Lilliott walked to put two on and Edwards came on to run for Roberts, and advanced to third on a passed ball. But a pick-off at first ended the threat.
JD had its most productive at bat in the fifth as Roberts led off with a double, went to third on a Lillie Beth Hughes single and Lilliott walked to load the bases with no one out. After a strikeout, Jackie Green walked to drive home Roberts to cut the score to 4-1 with the bases loaded and still only one out. But a strikeout and a ground out ended the inning.
Roberts, with a single and a double, had half of the Lady Jacket hits. Wooten and Hughes both singled and Jakhia Greene had JD’s only RBI.
Parlor took the loss. She went two innings, giving up two earned runs on three hits, walking two and striking out two. Poe pitched five innings, giving up one run of five hits, walking five and striking out none.
Score by innings:
LCHS 3 0 0 0 0 0 1 -4
JDHS 1 0 0 0 0 0 0 -1