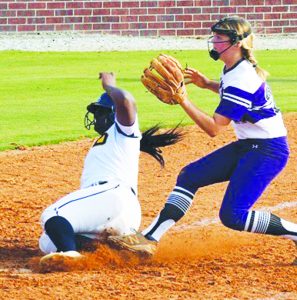 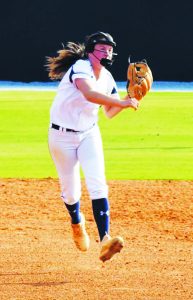 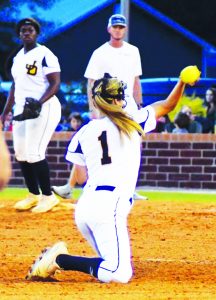 Kesleigh Poe makes a play from her knees 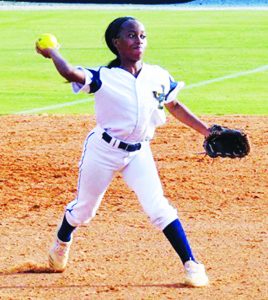 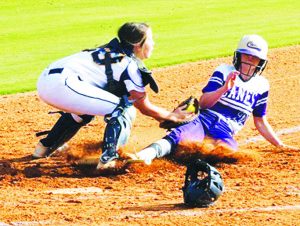 Annalese Poole tags out a runner at home 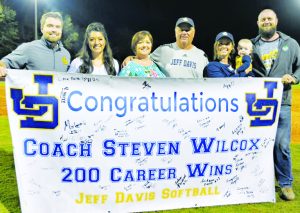 Jeff Davis High’s softball team handed Head Coach Steven Wilcox his 199th and 200th career coaching victories last week as the Lady Jackets downed Monticello 5-1, 2-0 to advance to the Elite Eight Finals Tournament in Columbus.
Pitchers Kelsey Parlor and Kesleigh Poe held the Lady Hurricanes to just one run in 14 innings. Parlor pitched a 5-hitter in the opening game and Poe pitched a 2-hit shutout in the nightcap.
In the opening game, Monticello opened the first inning with its only run of the series and that run came thanks to a passed ball as it was unearned.
The Lady Jackets responded with a run of their own in the bottom half of the inning as Fefe Greene led off with a single, stole second, advanced to third on Paige Carter’s ground out and scored on a double by Annalese Poole.
The score remained tied at 1-1 until the fifth when JD put two runs on the board thanks to Monticello errors. Carter singled, Dee Wooten was hit by a pitch and Georgia Roberts reached on an error as Carter scored. Allie Lytle singled to load the bases and Wooten scored from third on a passed ball.
Jeff Davis added two insurance runs in the sixth. Carter, Wooten, Poole and Roberts had four consecutive 2-out singles to put the two runs on the board.
In the top of the seventh, Monticello loaded the bases on an error and a pair of 2-out singles. But Parlor got the next batter to fly out to left to end the game.
Poole had a double, a single and two RBI to lead the Lady Jackets at the plate. Carter had a pair of singles, Roberts had a single and two RBI, and Fefe Greene, Wooten, Lytle, Karlie Watson, Bianca Torres and Jakhia Greene each singled.
Parlor gave up five hits, walked one and struck out two.
Poe dominated the Lady Hurricanes in the second game, giving up a harmless single in the first inning. And it was a good thing because the Lady Jackets managed only two unearned runs as their offense sputtered.
Jeff Davis’ runs came in the second on a pair of Monticello errors. Lytle put down a one-out bunt and reached on an error. After Torres singled, Jakhia Greene laid down a sacrifice bunt but she, too, was safe on an error to load the bases. Fefe Greene then singled to drive home Lytle and Torres scored on a Carter ground out for the final run of the game.
Monticello’s single came in the bottom of the first inning with two outs. Poe then got the final out with a strike out, and retired the Lady Hurricanes in order in the second. Monticello got two runners on in the third thanks to a walk and an error, then Poe retired the side in order in the fourth, fifth and sixth. An error got a runner on in the seventh with two outs but Poe retired the final batter by fielding a bunt and throwing to second for the force out to end the game.
Carter had a pair of doubles and an RBI, Fefe Greene singled twice and drove in a run, Poole singled twice and Torres had a single.
Poe’s one-hitter came with one walk and one strikeout.
Score by innings:
MHS 1 0 0 0 0 0 0 -1
JDHS 1 0 0 0 2 2 x -5