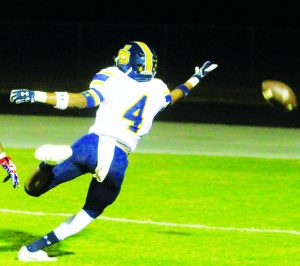 Tyson Alls can’t quite get to this pass 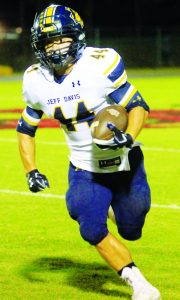 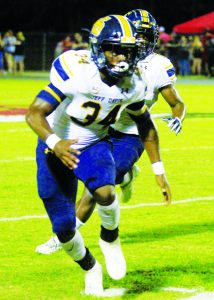 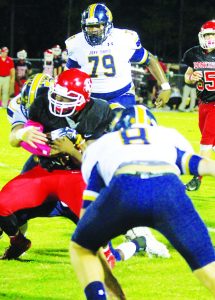 The defense surrounds a Redskin runner 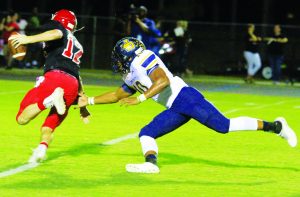 The Yellow Jacket defense harassed the Bryan quarterback from start to finish. Here Tre Chandler forces him out of the pocket 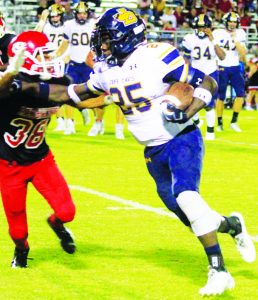 Greg Chambers runs after catching a pass from Britt Metts

Defeat? Easy win? Rout? Blowout? Destruction? Vanquishment? Domination? How about annihilation?
It would be hard to come up with an adequate description of what happened in the first half of Friday night’s Jeff Davis High-Bryan County High football game. Everything went right for the Yellow Jackets and wrong for the Redskins as Jeff Davis rolled to a 43-0 halftime lead.
So dominate were the Jackets that the JD coaching staff began substituting in the second quarter.
With a running clock in the second half, the Jeff Davis bench enjoyed some valuable game experience through the final two quarters. Bryan scored a TD to make the final score a little more respectable at 43-7.
The Yellow Jackets improved to 6-0 overall and 2-0 in Region 2-AA. Bryan fell to 0-5 and 0-2.
This week, Jeff Davis faces its toughest opposition of the season as 4-1 Vidalia visits the Pinelands with a week of rest as they were idle last Friday. The two teams have faced only one mutual opponent, Bryan County. While Jeff Davis defeated Bryan 43-7, Vidalia took a 41-12 win over the Redskins.
The Indians defeated Emanuel County Institute 24-21, Tattnall County 15-6, and Long County 36-0. Their only loss came in the season opener as they dropped a 24-0 game to Appling County.
Friday in Pembroke, the Jackets took the opening kickoff and scored in just five plays, covering 51 yards. After converting a 3rd down situation in JD’s first series, Jashaun Kirby picked up 13 yards to the 28, driving back a Redskin defender for the final eight yards of the run. Aahiyus Allen then took the ball around the right side for a 28-yd. TD run. Audiel Placencia kicked the extra point to put JD up 7-0.
The Jackets quickly established their defensive domination on Bryan’s first possession. After a run netted nothing, Caleb Parlor was in the quarterback’s face to force an incomplete pass, and then Tre Chandler and Austin Wood pressured the QB for another incompletion.
The Jackets then made it look easy as they rolled 59 yards in six plays. Britt Metts opened the drive with a 12-yd. pass completion to Greg Chambers, Bradley Owens ran for 10 and eight yards and a 15-yd. penalty moved the ball to the Bryan 12. Allen then got eight and Metts hit Matthew Glass for a 4-yd. scoring pass. Cade Walters then handed off to Allen for the 2-pt. conversion to up the score to 15-0.
On the first play after the kickoff, a high snap enabled James Wood to get a 6-yd. sack, James Wood and Chandler pressured the quarterback into an incompletion, and James Wood then sacked the quarterback for a 10-yd. loss.
A short punt gave the Jackets the ball at the Bryan 32. Metts hit Chambers for 25 and, after an incomplete pass, Austin Wood carried for seven yards and the TD on the final play of the first quarter. Placencia’s toe made it 22-0.
On the second play after the kickoff, Bryan fumbled and Owens recovered at the Redskin 21.
The Jackets scored in four plays. The final two plays were a 14-yd. pass from Metts to Austin Wood and an 8-yd. run by Austin Wood for the score. Placencia kicked the extra point to up the tally to 29-0.
Bryan fumbled the ensuing kickoff and Chandler jumped on the pigskin to put JD in business at the Redskin 34. After a penalty moved the ball to the 29. Allen ran for two and 27 yards for the score. Placencia made it 36-0.
Jeff Davis began its final first half scoring drive at the JD 35. It took them six plays to cover 65 yards.
Kirby got a workout in the drive, picking up 65 yards in six carries. JD Coach Lance Helton made an unsuccessful attempt to stem the scoring by running Kirby up the middle all six plays. But the Redskins simply couldn’t tackle Kirby as he ran through and over tacklers. He had two 18-yd. runs in the drive, the second for the score. Placencia kicked the P.A.T. for the 43rd point.
In the first half, the Jackets had 247 yards of total offense — 188 rushing and 59 passing. The Redskins had minus-13 yards rushing and no pass completions in the first half. They had minus-21 yards rushing before getting eight yards with the Yellow Jacket substitutes on the field on the final two plays of the first half.
Bryan made two first downs in the first half, both coming thanks to penalties against the Jackets.
The second half went by quickly. With Conner Rea running the offense the Jackets marched from their own 31 to the Bryan 31 before a fumble on the final play of the third quarter stopped the drive. Landon Roberson and Terrance Clemons did most of the running for Jeff Davis in the second half.
In the fourth quarter, Bryan used a 26-yd. pass completion and a 44 yard run for a score to get on the scoreboard. The P.A.T. made it 43-7.
Score by quarters:
JDHS 22 21 0 0 -43
BCHS 0 0 0 7 – 7