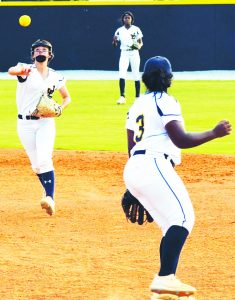 Bianca Torres throws to Dee Wooten at first for the out 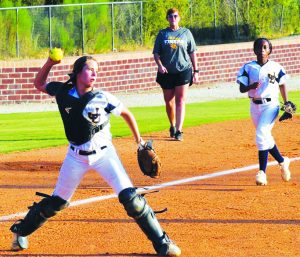 Annalese Poole with the throw to first 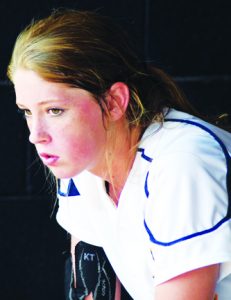 Pitcher Kelsey Parlor between innings with her “game face”

Jeff Davis High’s softball team earned a berth in the 2019 State Tournament last week with a 2-game sweep of Swainsboro in the Region 2-AA Tournament.
Monday, they met No. 2 seed Bacon County in Alma and fell 3-2, 5-1. They play tomorrow (Thursday) against Toombs County to determine the No. 3 and No. 4 seeds from the region for the playoffs. Vidalia and Bacon play for the No. 1 and 2 spots.
In the first game against Swainsboro, after 2 1/2 scoreless innings, the Lady Jackets put four on the board in the third. Jakhia Greene walked and Fefe Greene triple her in. Paige Carter singled to score Fefe and Dee Wooten followed with a homer for a 4-0 JD lead.
Jeff Davis added two more in the fourth on a bases loaded, 2-run single by Alicia Lilliott.
JD closed out its scoring in the sixth with a run-scoring line by Georgia Roberts.
Wooten had a homer, two singles and two RBI, Lilliott had two singles and two RBI, Fefe Greene tripled in a run, Tia Cornish tripled, Carter and Roberts both had a single and an RBI, and Annalese Poole and Jakhia Greene singled.
Kelsey Parlor was the winning pitcher. She went the distance, giving up an unearned run on three hits, walking none and striking out nine.
Cornish had the best day of her career in the nightcap with a double, two triples and five RBI as Jeff Davis rolled to the 10-1 victory.
The Lady Jackets set the tone early with a 5-run top of the first. Fefe Greene led off the game with a walk, stole second and scored on an error. Carter followed with a single, stole second and third, and scored on a Roberts 2-out single. After an error put Poole on base, Cornish cleaned the bases with a triple. She scored on a Bianca Torres single to make it 5-0.
In the third, Cornish followed singles by Roberts and Poole with her second triple to up the score to 7-1.
In the fourth, Jeff Davis put the game out of reach with three more runs. Carter singled and scored when Allie Lytle reached on an error. Roberts plated Lytle with a single and Cornish doubled to score pinch runner Cara Edwards to make it 10-1.
Roberts wasn’t far behind Cornish’s performance as she was 3-for-3 with two RBI. Carter had a pair of singles, Wooten doubled, Torres singled and had an RBI, and Fefe Greene, Analese Poole and Riley Mathis each singled.
Parlor again was the winning pitcher. She went 4 2/3 innings, blanking Swainsboro on one hit, walking one and striking out four. Kesleigh Poe started and pitched 1/3 inning, giving up an unearned on no hits, walking two and striking out none.
The Lady Jackets couldn’t get their scoring untracked against Bacon. They left 23 runners stranded in the 2-game series, 11 in the opener and 12 in the second game.
In the first game, they out-hit the Lady Red Raiders 8-6 but fell 3-2.
In the opener, Bacon took a 2-0 lead in the bottom of the third on a pair of walks, a sac fly and a single.
In the top of the fourth, Jeff Davis got consecutive singles from Lytle and the two Greenes to get within 2-1.
Bacon made it 3-1 in the fourth.
The Lady Jackets’ final run came in the sixth on a Carter run-scoring single.
JD had plenty of opportunities but couldn’t come up with the key hits. They loaded the bases with two outs in the first, left runners stranded on second and third in the third, left two more on base in the fourth and fifth, and had the bases loaded with one out in the sixth but couldn’t get a run across the plate.
Lytle and Carter both had a pair of singles with Carter driving in a run. Fefe Greene singled in a run, and Roberts, Poole and Jackhia Greene each singled.
The Raider coaches shied away from pitching to senior slugger Dee Wooten as she was intentionally walked four times, twice with 2-0 counts and twice without throwing her a pitch.
Parlor took the loss. She went five innings, giving up one run on three hits, walking five and striking out five. Edwards pitched one inning, giving up two runs on three hits, walking one and striking out none.
JD’s only run in the nightcap came in the bottom of the third when Fefe Greene bunted and reached on a bad throw by the third baseman. The ball went into the right field foul area and the speedy Greene made it all the way around the bases to score.
Jeff Davis had two on with one out in the first, left a runner on base in the second, had two on with no outs in the third and couldn’t score after Fefe Greene’s bunt score, left two on in the fifth, had the bases loaded with one out in the sixth but a line drive out to third doubled up the runner at third to end the inning, and in the bottom of the seventh they had the bases loaded with one out again, but a strikeout and a ground out stopped the rally.
Torres had a pair of singles, and Carter, Wooten, Roberts and Jakhia Greene each had singles.
The first six times Wooten came to the plate in the 2-game series, she was walked intentionally. Finally, in the second game, with a 5-1 lead, Bacon felt it was safe to pitch to her. She hit a ground ball single the first time they pitched to her and lined out to center the other time.
Poe went the distance on the mound. She gave up five runs on nine hits, walked three and struck out none.
Score by innings:
SHS 0 0 0 0 1 0 0 -1
JDHS 0 0 4 2 0 1 x -7