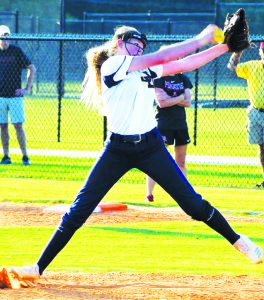 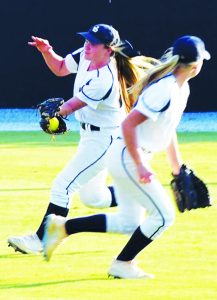 Jeff Davis High’s softball team had a rough time over the last week, dropping three games, two of which were key Region 2-AA contests against Bacon County.
The Lady Jackets fell 8-0 Tuesday in Hazlehurst to Bacon, dropped a 6-2 game to Appling County Friday in the Jeff Davis Tournament and then saw a late Bacon rally Monday turn an 8-5 JD lead into a 9-8 defeat.
With the losses, Jeff Davis fell to 8-10 overall and 5-4 in the region.
There wasn’t much action from the Lady Jacket bats in Tuesday’s 8-0 lost to Bacon as senior catcher Georgia Roberts’ single was the only hit. Jeff Davis had three walks and two hit batters, and Karlie Watson had a sacrifice and reached on an error but that was all the offense the team could muster.
Five of Bacon’s eight runs were unearned as JD committed four errors.
Kesleigh Poe absorbed the loss on the mound. She went three innings, giving up three earned runs on four hits, walking three and striking out two. Cara Edwards pitched 2 2/3 innings, blanking Bacon on one hit, walking none and striking out none. Kelsey Parlor pitched 1 1/3 innings, giving up three unearned runs on three hits and a walk. She struck out none.
The game against Appling was a 5-inning contest. The Lady Pirates built a 4-0 lead through 2 1/2 innings and the Lady Jackets couldn’t catch up.
JD scored their two runs in the bottom of the third when Fefe Greene got a one-out single, took second on a wild pitch and scored on the throw when Allie Lytle singled on a bunt to third. Lytle went to second when Dee Wooten walked, and scored on a single by Paige Carter.
Jeff Davis had a chance to score in the bottom of the second with runners at second and third with one out. But on a fly out to center, Annalese Poole was thrown out at the plate after tagging up.
The Lady Jackets loaded the bases with no one out in the fourth but a force at home, a line drive out and a strikeout ended the threat.
Tia Cornish doubled and Fefe Greene, Lytle, Carter, Poole and Bianca Torres each had singles. Lytle and Carter both had RBIs.
Parlor started on the mound and went 3 2/3 innings. She gave up four earned runs on five hits, walked one and struck out two. Edwards finished 1 1/3 innings, giving up one run on three hits, walking none and striking out none.
Monday’s game started out badly for JD as Bacon scored five runs in the first two innings. But the Lady Jackets bounced back with a 4-run fourth and a 4-run fifth to go up 8-5. But Bacon battled back, eventually scoring an unearned run in the bottom of the seventh to win 9-8.
In the fourth, the Lady Jackets loaded the bases with a walk and two hit batters. Poole then singled in a run and Roberts had a sacrifice fly to center to score another run, making it 5-2. Torres and Alicia Lilliott had back-to-back run-scoring singles to make it 5-4.
In the fifth, Fefe Greene singled and Lytle walked. Wooten followed with a 3-run homer over the center field fence and suddenly Jeff Davis was up 7-5. A Poole single and walks to Torres and Karlie Watson loaded the bases with two outs. Jakhia Greene then laid down a bunt single to drive home Poole, making it 8-5. But a foul pop out ended the inning with the bases full of Lady Jackets.
In the sixth, Wooten came to the plate again with JD leading 8-6 but the Lady Raiders intentionally walked her.
Bacon tied the game with a 2-run homer in the sixth and their winning run came on an error with two outs in the seventh inning.
The Lady Jackets had eight hits, led by Poole with a pair of singles and an RBI. Wooten had a 3-run homer, Torres, Lilliott, and Jakhia Greene each had a single and an RBI, Fefe Greene and Watson both had singles, and Lytle had a sacrifice and an RBI.
Poe started on the mound and went two innings. She gave up four earned runs on five hits, walked three, hit one and struck out none. Edwards went 2 1/3 innings, giving up one run on four hits, walking one and striking out none. Parlor pitched 2 1/3 innings, giving up two earned runs on three hits, walking one and striking out none.
Score by innings:
BCHS 0 0 5 0 0 0 3 -8
JDHS 0 0 0 0 0 0 0 -0