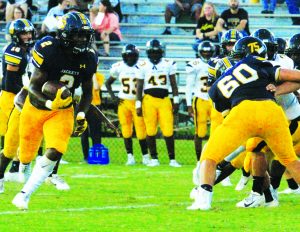 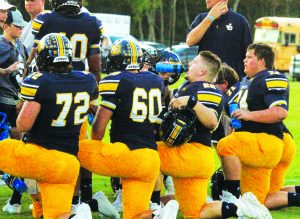 Offensive line gets a well-earned rest 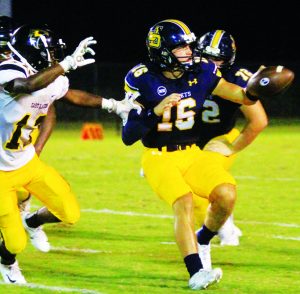 Britt Metts pitches on an option 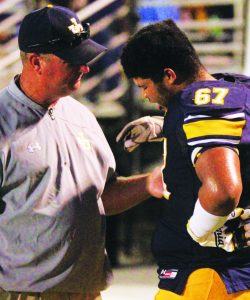 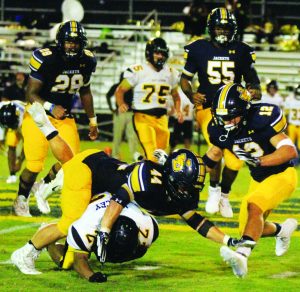 The defense brings down a Falcon

One would be hard pressed to determine which phase of Jeff Davis High’s football game was best Friday night against East Laurens: Offense or defense.
Both were exemplary as the Yellow Jacket defense held the Falcons to just 67 yards of offense while the JD offense gobbled up 555 yards of offense and put 53 points on the board in a 53-0 victory.
Three Jacket backs topped 100 yards rushing as the JD offensive line dominated the game. Tight end Matthew Glass, guards Nate Lewis and Chasten Googe, center Christian Ray, and tackles Conner McLoon, Jackson Yawn and Jaylen Grady continually opened up the Falcon defensive front wall. As a result, Aahiyus Allen ran 11 times for 160 yards and three touchdowns, Bradley Owens, who was starting in the place of Austin Wood who was out with a concussion, ran nine times for 131 yards and a score, and Jashaun Kirby, playing his first game of the season after an injury kept him out of the first two games, picked up 120 yards in 12 carries. The Jackets picked up 450 yards on the ground and quarterback Britt Metts passed for another 100 yards and two touchdowns, to Glass and Allen.
Orlando Payan booted a 33-yd. field goal and an extra point, and Audiel Placencia was 5-for-5 in extra point kicks.
The defense held the Falcons to 38 rushing yards and 29 through the air and had one fumble recovery.
Linebacker Tre Chandler led the defense with eight solo tackles and one assist, and a fumble recovery.
JD marched 98 yards in seven plays for its first score. A facemask penalty against the Falcons, a 22-yd. Allen run, a 10-yd. pickup by Owens and a 33-yd. touchdown jaunt by Allen were the big plays in the drive. The scoring run looked just the way the coaches drew it up with blocking and faking so effective Allen could have trotted his way to the score. On the extra point attempt, would-be holder Cade Walters caught the Falcon defense out of position, took a direct snap and scored with a nifty move at the goal line for two points and an 8-0 JD lead.
The Jackets’ next possession started at the JD 24 and it started much the same way as their first. On the first play Allen scampered 43 yards around the right side with Kirby leading the blocking with Allen close behind the entire run. But the Jackets couldn’t capitalize and East Laurens took over at the 26.
On the first play of the second quarter, Chandler darted in from his linebacker position and nailed the Falcon runner for a 5-yd. loss. After Andrew Aycock batted down a pass at the line of scrimmage and another pass was dropped, the Falcons had to punt the ball away from their own end zone.
Starting at the East Laurens 31, it took Jeff Davis six plays to score. Kirby had a 12-yd. run to the 13 and two plays later Metts hit Glass with an 11-yd. scoring toss. Placencia kicked the extra point to make it 15-0.
Just before halftime, the Jackets’ Owens and Jaylen Grady nailed the Falcon quarterback for a 2-yd. sack. The teams went to their locker rooms at halftime with the Jackets leading 15-0.
The JD offense ran like a well-oiled machine in the third quarter, scoring 28 points. They took the second half kickoff and marched 66 yards in five plays to make it 22-0, went 60 yards in three plays to go up 29-0, covered 88 yards in seven plays to make it 36-0, and then went 34 yards in three plays to push the lead to 43-0.
On the first drive, Allen started things with a 14-yd. scamper, three plays later Kirby had a 38-yd. run. Allen scored easily on the next play as Lewis led him through a huge hole and wiped out the last defender.
On the 60-yd. drive, Metts opened things with an option pitch to Owens who dashed 47 yards to the Falcon 24. Two plays later, the blocking was perfect as Owens went 11 yards without being touched for the score.
On the second play of the 88-yd. march, Owens had yet another key run, this time for 44 yards as, again, the blocking was picture perfect with Conner McLoon throwing the key block. Two plays later, Metts hit Alls with 34-yd. completion to the nine, and three plays later a wide-open Allen gathered in a 5-yd. scoring pass from Metts.
The final scoring drive of the third quarter was set up by a bad pitch that Chandler and two other JD defenders pounced on at the East Laurens 34. Two plays after Metts was sacked back at the 43, Allen took advantage of his blocking to dash 43 yards for the score.
The Falcons fumbled the ensuing kickoff and Zion King recovered to put JD in business at the East Laurens 32.
Despite a 26-yd. run by Kirby, the Jackets couldn’t put the ball in the end zone and Payan came on to boot a 33-yd. field goal on the fifth play of the final quarter to up the tally to 46-0.
Late in the game, with fresh Blue jerseys on the field, sophomore Tyree Hines dashed through a big hole and raced 38 yards for the final Jeff Davis touchdown. Payan kicked the P.A.T. to make it 53-0 on the final snap of the game.
Score by quarters:
ELHS 0 0 0 0 – 0
JDHS 8 7 28 10 -53