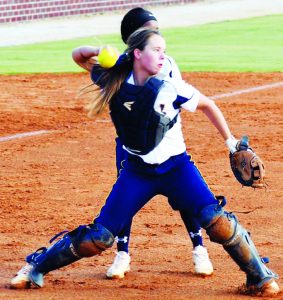 Annalese Poole throws out a runner at first 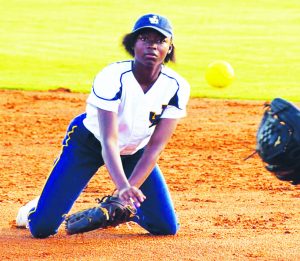 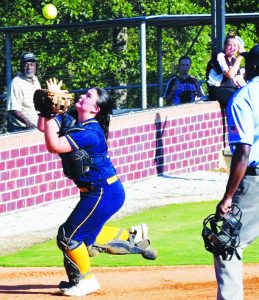 Jeff Davis High’s softball team took a pair of Region 2-AA wins last week, shutting out Swainsboro 7-0 Tuesday and edging Metter 4-3 Thursday.
The wins improved the Lady Jackets’ record to 8-7 overall and 5-2 in the region.
Kelsey Parlor went the distance on the mound against Swainsboro, throwing a 3-hit shutout, walking two and striking out five.
JD struck early with a pair of runs in the bottom of the first inning.
Fefe Greene started things with a lead-off single and went to second on an Allie Lytle sacrifice bunt. After Dee Wooten and Paige Carter walked to load the bases, Annalese Poole singled to drive in two runs.
Poole came up big again in the third as Wooten led off with a double followed by a Carter single. Poole then singled to center to drove in two more runs.
The Lady Jackets got three insurance runs in the bottom of the sixth. Georgia Roberts got a one-out triple and scored on Fefe Greene fielder’s choice as Roberts beat the throw to home. Greene advanced to third on a passed ball followed by a Wooten walk. Carter then singled to score Greene and Poole followed with another single for her fifth RBI of the game.
Poole was 3-for-4 with five RBI to lead the offense. Carter had a pair of singles and an RBI, Roberts tripled, Wooten doubled, and Fefe Greene drove in a run with a single.
Against Metter Thursday, Jeff Davis broke a 3-3 tie in the bottom of the sixth inning to win 4-3.
The Lady Jackets got on the board quickly as Fefe Greene led off the bottom of the first with a triple and scored on a line drive to center by Lytle.
Metter tied the game in the fourth and went up 2-1 in the fifth, with both runs coming on errors.
In the bottom of the fifth, Jakhia Greene got a lead-off single, Fefe Greene was hit by a pitch and Lytle sacrificed them to second and third with a bunt. Dee Wooten then singled to left and both Greenes scored to put JD back on top 3-2.
In the top of the sixth, Metter loaded the bases with a walk and back-to-back JD errors. A bases loaded walk gave the Lady Tigers their third unearned run of the game and tied the score 3-3.
In the bottom of the sixth, Tia Cornish drew a one-out walk and went to second on a Jakhia Greene sacrifice bunt. Fefe Greene followed with a 2-out double to score Cornish with the go-ahead run.
Metter got two runners on with one out in the seventh, but pitcher Kesleigh Poe got the next two batters to pop out to end the game.
The Lady Jackets out-hit Metter 8-1 led by Fefe Greene’s double, triple and RBI. Lytle doubled, Wooten singled and had two RBI, and Carter, Poole, Roberts and Jakhia Greene each had a single.
Poe pitched all seven innings, giving up just one hit but errors allowed the Lady Tigers to score all their runs. Poe walked three and struck out a season-high nine.
The Lady Jackets committed nine errors on defense.
Score by innings:
SHS 0 0 0 0 0 0 0 -0
JDHS 2 0 2 0 0 3 x -7