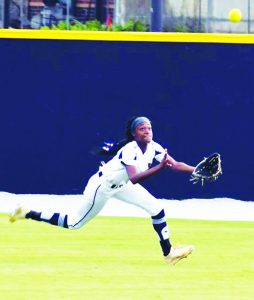 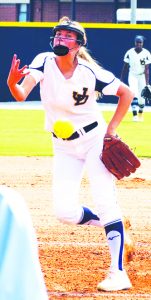 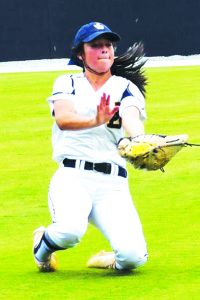 Jeff Davis High’s softball team took a pair of 9-0 region wins over St. Vincent’s Academy last Tuesday in Hazlehurst but Thursday Vidalia scored three late runs to take a 5-3 win over the Lady Jackets in Vidalia. Monday, the Lady Jackets dropped a 4-3 game to visiting Pierce County.
The games left Jeff Davis with a 6-7 overall record and a 3-2 record in Region 2-AA. Vidalia improved to 7-1 and 5-0, St. Vincent’s fell to 2-6 and 1-5. Pierce, a AAA team, improved to 7-3-1 and 1-1.
In Tuesday’s first game, Fefe Green had a pair of triples, a single and an RBI to lead the offense. Bianca Torres doubled and had two RBI, Breana Schroeder, Alicia Lilliott and Georgia Roberts each singled and drove in a run, Allie Lytle, Maeleigh Burns and Karlie Watson each singled, and Dee Wooten had an RBI.
The Lady Jackets scored four times in the opening inning as Fefe Greene and Lytle had back-to-back singles and Wooten followed with a sacrifice fly to score Greene. With two outs and runners on first and third, Torres doubled in two runs. Torres scored later on an error.
They added three more runs in the second to go up 7-0. Jakhia Greene reached on an error and scored on a Fefe Green triple. An out later, Lilliott singled to score Fefe Greene and Roberts singled in Lilliott.
JD wrapped up the scoring in the third with two runs. Watson had a one-out single and scored on an error. Fefe Greene followed with her second triple and scored on a Schroeder single.
Kesleigh Poe picked up the win on the mound, retiring the first 10 batters she faced until a pair of singles and a walk loaded the bases for St. Vincent’s in the fourth with two out. But Poe struck out the next batter to end the threat. In the fifth, St. Vincent’s loaded the bases again with only one out. But Poe struck out the next batter and got the final out on a grounder to third.
Poe finished with a 4-hit shutout, walking two and striking out eight.
In the second game, the Lady Jackets again struck early with a 6-run first.
Fefe Greene, Cara Edwards and Paige Carter started the game with three straight singles. After an error and a walk loaded the bases with Jeff Davis up 2-0, Roberts was hit by a pitch to make it 3-0. Torres grounded out to score another run and a pair of fielder’s choices plated the final two runs.
A Lilliott single, a hit batter and a Roberts single scored a run in the second.
In the third, a pair of walks, an Edwards single and a Riley Mathis ground out put JD up 8-0.
The final run came in the fourth, as Tia Cornish singled and scored on a Annalese Poole double.
Edwards was 3-for-4 with a trio of singles to lead the offense. Carter singled twice and drove in a run, Roberts singled and drove in two runs, Poole doubled in a run, Fefe Greene singled and had an RBI, Cornish singled, and Mathis, Torres and Jakhia Greene each had an RBI.
Torres was the winning pitcher. She three three innings, giving up one hit, walking one and striking out one. Burns pitched 1 1/3 innings, giving up two hits, walking one and striking out none, and Edwards pitched 2/3 inning, giving up one hit, walking none and striking out none.
Thursday in Vidalia, the Lady Jackets carried a 3-2 lead into the bottom of the sixth inning but the Lady Indians struck for three unearned runs to take a 5-2 victory.
Jeff Davis got all its runs in the third. Trailing 1-0, Jakhia Greene drew a 2-out walk, followed by back-to-back-to-back singles by Fefe Greene, Lytle and Carter to give the Lady Jackets a 2-1 lead. Lyle then scored on a passed ball to make it 3-1.
Jeff Davis led 3-2 going into the bottom of the sixth when a pair of singles sandwiched around an error tied the game 3-3. Then a 2-out, 2-run double gave the Lady Indians their 5-3 lead.
Carter had a pair of singles and two RBI, Lytle singled twice and Fefe Greene singled once.
Poe pitched the first four innings, giving up one earned run on three hits, walking four and striking out one. Kelsey Parlor pitched the final two innings, giving up three unearned runs on three hits, walking two and striking out two.
Monday’s game against Pierce marked the second straight game in which the Lady Jackets’ opponent rallied for a come-from-behind win. JD led 3-1 going into the top of the sixth when the Lady Bears scored two tie the game. They got the go-ahead and winning run in the top of the seventh.
Trailing 1-0 in the fourth, the Lytle singled and Wooten followed with a homer over the center field fence to put Jeff Davis up 2-1.
The Lady Jackets increased their lead to 3-1 with a single run in the fifth as Torres got a two-out single and went to second on an error. Fefe Greene followed with a single to score Torres.
Pierce’s two runs in the sixth came on a bloop single with runners on second and third. Back-to-back doubles in the seventh gave Pierce its winning run. Pierce’s first run in the second was unearned and came on a bases-loaded, two-out walk.
The Lady Jackets managed only three hits, Wooten’s homer and singles by Lytle and Fefe Greene. Wooten had two RBI and Fefe Greene one.
Poe started on the mound and went 5 1/3 innings. She gave up two earned runs on five hits, walked three and struck out two. Parlor took the loss in relief. She went 1 2/3 innings, giving up one run on three hits, walking none and striking out one.
Score by innings:
SVA 0 0 0 0 0 -0
JDHS 4 3 2 0 x -9