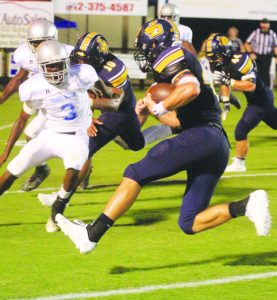 Austin Wood is airborne as he runs against Glenn Hills 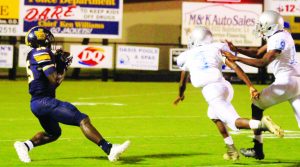 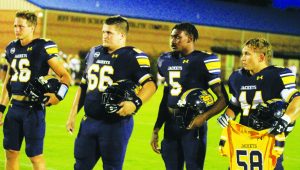 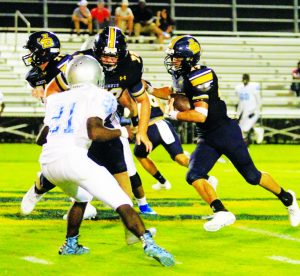 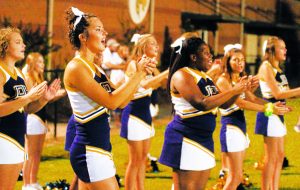 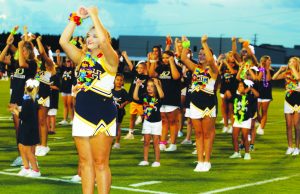 Jeff Davis High’s opening football game of the season started late and ended early — early the next morning, that is.
With two lengthy lightning delays, one before game time that pushed the opening kickoff to after 8 p.m., and the second late in the second quarter, the final play of the game didn’t come until well after midnight Saturday morning.
Fortunately, with the Yellow Jackets enjoying a 42-12 lead, the fourth quarter employed the mercy rule with a running clock during which Jeff Davis added another score and came away with a 49-12 victory. The running clock, of course, kept the game from lasting much longer.
At halftime, the game was still very much in doubt as the Jackets held only a 14-6 lead. But they erupted for 28 third quarter points to seal the Spartans’ fate.
The game got off to a rousing start for the homestanding Jackets as Audiel Placencia’s opening kickoff was muffed with the football bouncing around erratically, eluding the grasps of several players from both teams before Jeff Davis came up with the ball on the Glenn Hills 10.
On the first play from scrimmage, Austin Wood covered the distance with the blocking and faking so effective that no one could put a hand on the junior running back. Guard Nate Lewis made the final block that cleared the way to the end zone. Placencia’s toe made it 7-0.
Glenn Hills returned the second kickoff to its own 22 and the tide changed ominously as none of the Jacket defenders seemed able to bring down the Spartans’ big fullback. He ran 11, 8, and 13 yards, dragging Yellow Jacket defenders who could do little more than hold on for the ride. But the big fullback was soon tiring and the Jackets killed the drive. The big defensive play came from just outside the Jacket 30 when Greg Chambers nailed the ball carrier for a 2-yd. loss.
The next time Glenn Hills got the ball they moved to the JD 17. But after Andrew Aycock nailed a runner for a 1-yd. loss, Jevarion Coleman pressured the Spartan quarterback who threw a pass with Aycock in his face. That resulted in a bad pass that Aahiyus Allen picked off with a diving catch at the Jacket 10.
But on the first play after the turnover, Glenn Hills recovered a Jeff Davis fumble and the Spartans were in business again at the Jacket 10. Glenn Hills ran two plays to the move the ball to the five as the first quarter came to an end. The visitors couldn’t get the ball into the end zone and the Jackets took over at their seven.
Two plays later, Wood carried the ball around his left side, cut off blocks from Lewis and Chaston Googe and raced 26 yards out to the JD 41. After Wood and Bradley Owens picked up another first down, Britt Metts lofted a long pass to Chambers who gathered in the pigskin at the Glenn Hills 12. Two plays later, Metts hit a wide-open Matthew Glass in the end zone for a 9-yd. TD. Placencia made it 14-0.
After the Spartans recovered an onside kick, they went 60 yards in nine plays, scoring on a 9-yd. run. A bad snap foiled the P.A.T. attempt and it was 14-6. Neither team threatened the remainder of the half.
The third quarter was a compete turnaround for the Jacket offense. After a false start following the kickoff made it 1st-and-15 for JD, Metts retreated and fired a strike to Chambers who picked up 16 yards. The Jacket front line then began manhandling the Spartan front wall and four running plays carried the ball to the Glenn Hills 28. Allen then darted through a hole big enough to drive a truck through and fought his way to the 16. Wood followed his blocking for 11 more to the five and Metts then hit Allen for an easy 5-yd. touchdown pass. Placencia made it 21-6.
On the Jackets’ next possession, starting at the Jeff Davis 47, Wood went off his left side, picked up key blocks from Lewis and Googe, and raced 42 yards to the Spartan 11.
Owens then got seven and Tre Chandler four and the touchdown. Placencia made it 28-6.
On the next JD possession, a pass interference penalty moved the ball 15 yards to the Spartan 25. Chandler then got 12 up the middle, Allen ran seven to the seven, and Metts connected with Michael Dotson for a 7-yd. TD strike. Placencia was true again to make it 35-6.
With some fresh jerseys on the field for the JD defense, Glenn Hills scored in five plays. The scoring run came from the JD 30 on a broken play. The quarterback dropped the snap, picked up the ball and ran around his left end, breaking a tackle in the backfield and racing down the sidelines for the score. The Spartans went for two but failed and the score was 35-12.
Jeff Davis got the score right back as Dotson took the kickoff at his 17, raced up the middle of the field, dodged a pair of tacklers and raced into the end zone. Placencia’s kick made it 42-12.
Two plays after Placencia’s kickoff went through the end zone, the Spartans fumbled the ball at the 22. Owens then ran for nine and then 13 and the score midway through the final quarter. The kick upped the total to 49-12.
Wood rushed seven times for 101 yards and a touchdown, Chandler picked up 49 yards and a touchdown on eight carries, and Metts completed 85.7% of his passes for 79 yards and three TDs to earn player-of-the game honors.
Score by quarters:
GHHS 0 6 6 0 -12
JDHS 7 7 28 7 -49
Scoring:
JD – Austin Wood 10-yd. run. Audible Placencia kick.
JD – Matthew Glass 9-yd. pass from Britt Metts. Placencia kick.
GH – 9-yd. run. Run failed.
JD – Aahizus Allen 5-yd. pass from Metts. Placencia kick.
JD – Tre Chandler 4-yd. run. Placencia kick.
JD – Michael Dotson 7-yd. pass from Metts. Placencia kick.
GH – 30-yd. run. Run failed
JD – Dotson 83-yd. kickoff return. Placencia kick.
JD – Bradley Owens 13-yd. run. Placencia kick.