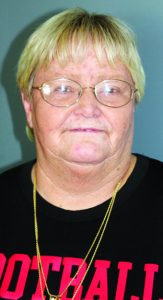 Diane Bass Leggett announced this week she will be a candidate for the Ward 3 post on the Hazlehurst City Council.
In making her announcement, Leggett said, “It’s time. It’s time for some different ideas and opinions in our city government.”
Leggett has lived in Hazlehurst all of her life. She was married to the late Edward Leggett for 55 years and has four children, four grand-children and four great-grandchildren. She graduated from Jeff Davis High School in 1965 and Brewton-Parker College in 1997.
“I would like to encourage each of you to go to the polls and vote on Nov. 5,” she said. “To those who are not registered to vote, you may get registered by Oct. 7 at the Jeff Davis County Courthouse. Everyone needs a voice in this matter. If elected, I will do my very best to serve the people of Ward 3 and do what is best for the City of Hazlehurst as a whole. Take a step in the right direction and vote for and elect Diane Leggett for Ward 3 City Council seat. Let me say thank you in advance for your vote.”