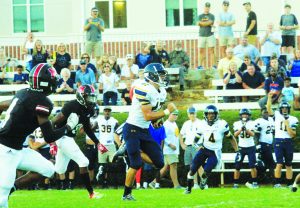 Jeff Davis and Morgan County high schools’ football coaching staffs got a look at their respective teams last Friday in Madison in their first pre-season scrimmage
While scrimmage games are not so much competitions as they are opportunities for coaches to evaluate their players, Morgan came out with a 26-15 edge on the scoreboard.
Morgan County made it look easy on their first possession of the scrimmage as the scored in just five plays, going 70 yards and scoring on a 20-yd. pass play.
After that initial series, the Jacket defense settled down.
On JD’s first play, a Metts pass looked to cover the distance but the receiver didn’t turn around in time and it fell incomplete.
On Morgan’s second possession, they carved out a couple of first downs and then defensive lineman Jaylen Grady fought off a blocker and stopped the ball carrier for no gain. After that the drive fizzled.
On the Jackets’ next possession, Grady threw the key block that sprung Austin Wood for a 45-yd. touchdown run on the left side and Audiel Placencia hit the point after.
Morgan used a pass interference penalty to moved the ball into Jacket territory but Wood came up from his linebacker position to cut off a runner and within a second a host of Jackets threw the runner for an 8-yd. loss. Later a Bulldog slant-in pass looked to be complete but Javarion Coleman came up to knock the ball loose for an incompletion. On 3rd-and-long Coleman came up with a big breakup of a long pass at the goal line. But he was called for pass interference. On 4th down, Morgan completed a pass, the receiver broke away and ran to inside the 10 yard line where Bradley Owens tackled the runner from behind and knocked the ball lose. Tyson Alls recovered and Jeff Davis took over at their own six.
After Jashaun Kirby got a first down with a couple of carries, the second quarter began with the Jackets on their 17.
From there, Metts lofted a pass deep over the middle to Wood who took the ball in at the JD 40 and battled his way to the Morgan 42 before he was stopped. After Owens had a 10-yd. run, Kirby and Wood took turns carrying the ball to the Bulldog six. But a penalty killed the drive and Placencia came on to kick a 32-yd. field goal.
Morgan scored on their next possession for their second score of the game.
After the score the Jackets put together another drive, this one highlighted by a 12-yd. Metts completion to Matthew Glass, and a pass interference penalty against the Bulldogs.
But a penalty against the Jackets foiled things and Placencia kicked a 39-yd. field goal.
Later, the Morgan quarterback lofted a long pass downfield that looked like it would score another TD but Alls came up at the last minute and knocked the pass away.
While the jayvees were on the field, a Bulldog snap sailed over the quarterback’s head and out of the end zone for a Jacket safety and Morgan put together a long drive for another touchdown.
The Jacket coaching staff used four quarterbacks and a host of substitutions during the game as they had a chance to put on video the play of all their players in preparation for the start of the 2019 season Aug. 23 at home against Glenn Hills.
This week, the Jackets have another scrimmage, going to Baxley to face Appling County.