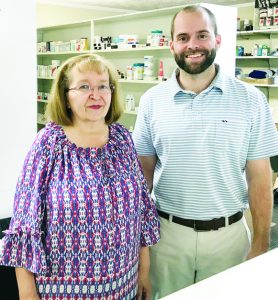 Jeff Davis County native Kolby Brown and his Lumber City Drug Store co-worker Denise Summerlin went through a harrowing experience Monday morning as Brown’s store was robbed at gunpoint of money and drugs, primarily opioids.
Brown, who recently purchased Lumber City Drugs, said he and Summerlin were in the store alone around 11 a.m. when two men came into the store wearing motorcycle helmets.
“I got a weird feeling,” said Brown. “Because there had been a robbery of a drug store in Douglas about four months ago, with the same thing happening — men coming into the store with helmets on.”
But at first, one of the men asked for some over-the-counter medicine and began asking questions about the medicine, adding that he had a little boy who was teething and asked if Motrin would help.
“He asked a number of questions,” Brown said. “It was like a normal customer. Then he said ‘What’s the total’ and that’s when they both pulled a gun out.”
The robbers ordered both Brown and Summerlin to get on the floor. They tied up Summerlin but had other plans from Brown, telling him to crawl on the ground to the store’s safe.
“I don’t keep drugs in the safe,” Brown said. “I knew what they were after and there were no drugs in the safe and I told him. He told me to give him whatever money was in there.”
They got what little money was in the safe and then started asking for specific drugs, adding that they knew the store had just received a drug shipment a half hour earlier.
“They started asking for opioids, pain killers, also liquid medication that is a controlled substance,” Brown said.
About that time customer Elaine Webster came into the store and made eye contact with Brown who was on the floor.
“I didn’t say anything but I gave her a look that let her know something was going on,” Brown said.
Later, she told Brown that she returned to her car where her husband, Gary, was waiting and told him “I think they’re being robbed.” So she dialed 911.
About that time a young customer came to the drive-thru window and the robber who was directing Brown waved money at him as if to let him know there was a robbery in progress. Apparently, Brown said, the customer mistook the gesture as an indication for him to come into the store, and he did.
“That’s when they got nervous,” Brown said. “They decided they needed to leave and they did. They both got on one motorcycle and left.”
Brown said both men had the visors up on their helmets and he could see that they were black.
Law enforcement officers arrived on the scene shortly afterward to investigate. The Georgia Bureau of Investigation took over the investigation. The motorcycle was located later on Hwy. 117 toward Jacksonville, Ga. Also found were a backpack, a hoodie, and some of the stolen items. Brown suspects they ditched the motorcycle and got into a motor vehicle. The motorcycle was checked and it turned out to have been stolen in Jacksonville, Fla.
Brown said investigators suspect that the two men were the same two men involved in the Douglas drug store robbery.
Brown also said that, during the robbery, one of the men knew Brown’s name, referring to him as “Mr. Kolby.”