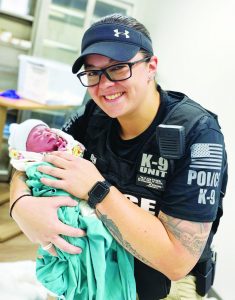 [EDITOR’S NOTE: The following story by Harley Strickland was taken from the WTOC-Savannah web site]
A Hazlehurst Police Officer responded to an unusual call early Thursday morning: to deliver a baby.
Amber Wood and her fiancé Efrain put their two children to bed Wednesday night. It wasn’t long after they went to bed, not knowing they would meet their new baby boy in just a few hours.
Wood was 37 weeks pregnant at the time. When she went to bed she had started having contractions, but she didn’t think she was close to having her baby boy. Around 1:45 early Thursday morning she woke up and knew it was time to go to the hospital.
“I changed my clothes and I said ‘Efrain, we need to go to the hospital’,” said Amber. “So, we took my other babies to their grandmother’s house and when we took them to their grandmother’s house we went to Flash Foods to put in gas.”
While her fiancé went inside to pay, Amber’s water broke. She started screaming for Efrain to call 911. That call is what officer Macy Deen heard while she was eating at a local restaurant in town.
“They came back over the radio and said contractions were a minute a part and this was her third child,” said Deen. “I said this baby is coming.”
Officer Deen knew she could make it to the Flash Foods before EMS. When she got there, she started putting on gloves and getting ready for a job she had never done before.
“It was coming and there was no stopping him,” said Deen. “So, I jumped right in.”
Immediately, she saw there was a problem.
“I noticed that the cord was wrapped around his neck so I immediately un done that and as soon as he came out he went to screaming and crying so I knew we were good with that,” said Deen.
“It’s awesome,” said Wood. “I feel like she saved my baby’s life in a way because the cord was around his neck and also I was pretty scared for myself, but I was more worried about him.”
Baby Shiloh was born at 2:12 that morning. Officer Deen was the first person to hold him besides mom.
“I was very happy and it was all good emotions and it’s just really hard to explain the feeling that it made me feel,” said Deen. “I helped bring a life into the world.”
“It really means a lot,” said Wood. “This is something I won’t forget for the rest of my life.”
Officer Deen says this is just part of her job and she would do it again in a heartbeat.
“With everything that is going on with law enforcement, we are hated a lot and just being able to be a part of that let me know that I’m doing the right thing and it’s all worth it.”