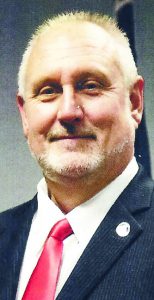 Eric Griffin this week announced his candidacy for Mayor of Hazlehurst in the Nov. 5, 2019, city election.
Griffin has served the last 7 1/2 years as Ward 3 City Commissioner.
A native and lifelong resident of Hazlehurst, he is a 1981 graduate of Jeff Davis High School and served in the U.S. Marines. He is a member of Oakland Baptist Church and Hazlehurst Masonic Lodge No. 283, has been employed with Advance Auto Parts for the past 21 years, and is currently general manager of the Advance Auto Parts Hazlehurst store.
He is married to Phyllis Griffin and they have four children and 11 grandchildren.
Since being elected as Ward 3 City Council member in 2011, Griffin has received his Certificate of Recognition, Certificate of Achievement and Certificate of Excellence in Continued Education from the Georgia Municipal Association. He has also completed the Robert E. Knox Jr. Municipal Leadership Institute.
Active in the Georgia Municipal Association, Griffin has served as president and vice-president of GMA District 9 and has sat on the Board of Directors of GMA for two years.
In making his announcement, Griffin said, “After much thought and prayer, I have decided to run for Mayor of Hazlehurst in the upcoming city election. It has been a pleasure to serve the citizens of Ward 3 as your council member for the past 7 1/2 years and hope for your continued support of my run for mayor.
“If given the opportunity to serve as your mayor, I will continue to serve the people of Hazlehurst to the best of my ability and in your best interest.
“I want to thank the citizens of Hazlehurst in advance for their support during the run for mayor but also want to thank the citizens of Hazlehurst for their support over the past 7 1/2 years. I will be making every effort to speak to each and every one of you over the next six months prior to the Nov. 5 election.”