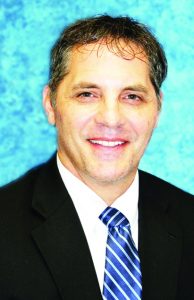 The Jeff Davis County Board of Education unanimously selected Jeff Davis High Principal Chris Roppe as the sole finalist for Superintendent of Schools to replace Dr. Stan Rentz who will retire at the end of the school year. The action was taken at Monday’s April board meeting.
In bringing up the matter, Board Chairman Roger Ogilvie explained that the board had chosen six of the 18 applicants to be interviewed by the board. Those interviews were conducted over the last several weeks.
“It’s one of the toughest jobs as board members were have to do,” he said. “We wanted the best person who would be able to work with us, with the staff and with the community.”
Roppe has 11 years of administrative experience in schools in Jeff Davis, Appling, Pierce and Bacon counties. He also taught and coached at Jeff Davis High for four years.
The naming of the finalist ends three months of intense search activity by the board. In January, the board employed search consultants King-Cooper and Associations. With the help of the search firm, the position was advertised, candidates screened and lengthy interviews conducted. The Board must now wait at least 14 days before taking an official vote to employ Roppe.
Roppe is a graduate of Bacon County High School, and Georgia Southern University with a B.S. Degree in Health and Physical Education. He has Master’s and Specialist degrees in Educational Leadership and Curriculum and Administration from Nova Southeastern University and should complete his Doctoral degree in December.
The board was impressed with Roppe’s variety of experiences and his work at Jeff Davis High. If approved by the board, it is anticipated Roppe will begin work July 1.
Board Chairman Roger Ogilvie said, “We are happy to have Mr. Roppe as our superintendent finalist. He is committed to Jeff Davis County. I also appreciate how well the board has worked together during this process.”
Among his varied administrative experience, he is in his second year as JDHS principal, he was Director of Special Education with Jeff Davis 2015-2017, Principal of Appling County Middle School 2012-2015, Assistant Principal of Pierce County High School 2010-2012 and Assistant Principal of Bacon County Middle School 2008-2010.
In other action at Monday’s meeting, the board ….
…. recognized students who received full scholarships from the Sullivan Scholar Program of Scholarships from Valdosta State College. They were seniors Torrence, Weaver, Lindsey White, Haley Bass, Morgan Morris and Dyan Taylor, and juniors Elsa Gonzalez, Jimmy Cruz Rojas, Allie Lytle, Sarabeth Norris, Karlie Watson and Angelina Swenson.
…. watched as Dr. Rentz presented Scottie Pitts the WOW Award for March and Leslie Hodges the Extra Mile Award.
…. watched as JDHS Baseball Coach Paul Glass was presented a plaque representing his 400 wins at Jeff Davis High.
…. heard a presentation from Twisted Pine Golf Course Committee Chairman Linwood Truitt who asked that the board double its corporate membership fee in the next budget year.
…. voted to name Charles Carelock the contractor for improvements at the concession stand at the football stadium. Carelock, a Band Booster, offered to do the work at no charge.
…. approved the local CTAE plan presented by Dr. Joyce Davis.
…. amended the Strategic Waivers school System Contract.
…. heard from Assistant Superintendent of Operations Chuck Crosby lauded the work of GCA Services Group which handles the janitorial duties in the school system. Crosby said there would be 2% increase in the cost of the service as had been expected in the contract for the group’s services.
…. agreed to donate the scoreboard at the old gymnasium, which wasn’t being used, to the Jeff Davis Youth Center.
…. agreed to sell old cheer mat sections.
…. amended the FY19 budget.
…. heard financial reports. Finance Director Betty Corbitt said the latest Education Special Purpose Local Option Sales Tax collections were the highest they have been since 2015.
…. approved under a consent agenda supplements for special circumstances, extra-curricular supplements for FY2020 and a 2% raise for all classified staff.
…. hired for FY 2020 Deborah Marchant as an elementary teacher, Shelby davis as a pre-K special education teacher, Mallory Adams as a high school special education teacher, Jeff Weems as athletic training, Coutney Oliver as a primary paraprofessional and Noemi Acuna as an elementary paraprofessional.
…. hired effective April 16 Sonia Bush as a high school special education paraprofessional and Kinte Lamar Clements as a substitute bus driver.
…. accepted the resignations effective at the end of FY19 of Kaitlin Spell Cullens, Jeff Weems and Mathew Todd Claxton.