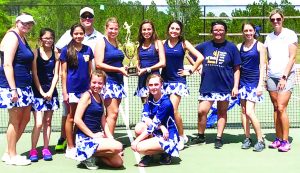 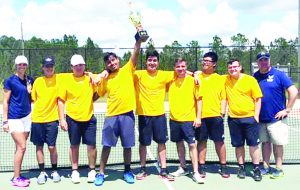 For the first time in 10 years, Jeff Davis High’s boys and girls tennis teams both won the Region championship in the same year.
For the Lady Jackets, it was their fifth straight Region 2-AA championship.
April 10-11, the teams competed in the Region 2AA Championship. JDH girls tennis went into the tournament ranked as the #1 team while the JDH boys went in ranked as the #2 team.
The boys played Swainsboro and defeated them 3-0 for a chance to play for the region championship. The boys faced Bacon County, the No.1 seed, and defeated them 3-0.
JDH girls played Swainsboro (the four seed) in the first match of the tournament. JDH girls then waited on the winner of St. Vincent’s (the 2nd seed) and Bacon county (the 3rd seed). Bacon County pulled an upset on St. Vincent’s making the championship match between Jeff Davis and Bacon again on the girls side. Jeff Davis girls defeated Bacon 3-0.
JDMS Tennis played West Laurens away April 8. Girls won 4-1 and boys lost 0-5. April 18, JDMS faced East Laurens at home. JDMS girls won 5-0 and boys won 4-1.
JDH boys tennis hosted the first round of state April 16 against East Laurens.
JDH girls will host the first round of state April 17 at 4:30 p.m. against Dublin
April 13-14, Jeff Davis Tennis Boosters hosted the 5th Annual Elliott Carter Memorial Tennis Tournament. Several competitors from throughout the state came to play in Memory of Coach Carter who passed away in 2014. Coach Carter had been a community coach in Jeff Davis for many years and played for Jeff Davis in his high school years. Coach Carter was and still is responsible for decades of success of tennis in Jeff Davis County, and he is still missed by so many.
The junior girls champion was Jacie Campbell. The junior boys champion was Caleb Beach.
The women’s doubles champions were Morgan Cox and Mary Katherine Kemp. The men’s doubles champions were Jaret Underwood and Buzzy Thorp. The mixed double competition was played Sunday with many matches being played but rain brought an end to play.