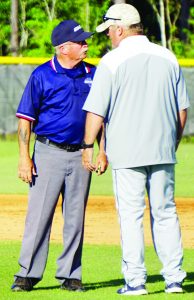 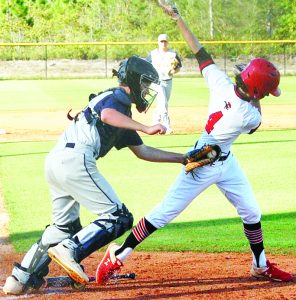 Matthew Glass tags out a runner 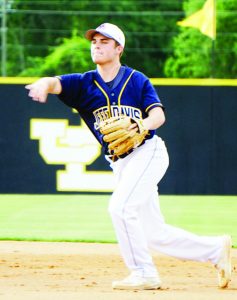 Garrison Miles throws out a runner 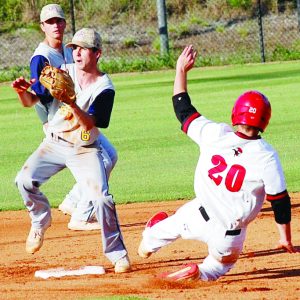 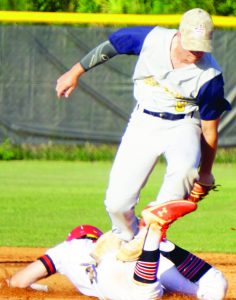 Britt Metts lands atop a Raider 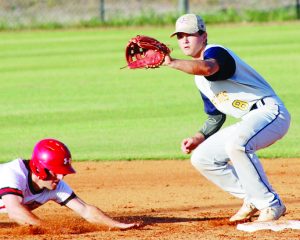 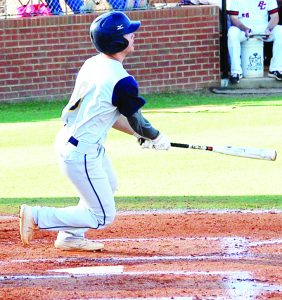 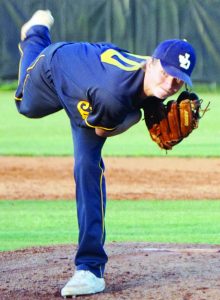 Jeff Davis High’s baseball team wrapped up the 2019 Region 2-AA championship last week with a 3-0 win over Bacon County Wednesday in Hazlehurst.
The Jackets enter the state playoffs with a 22-4 record. They finished 15-3 in region play to win their second region title in three years.
The three game series with Bacon opened with an 8-3 loss to the Red Raiders Tuesday in Alma and ended with a lackluster performance in a 2-1 loss to Bacon in Alma. It was the Jackets’ fourth region championship under Head Coach Paul Glass.
In the title winning victory, Caleb Leggett and Britt Metts combined for a 2-hit shutout and Hamp Hayes and Cade Walters both had a pair of hits and drove in a run.
Leggett started on the mound after coming off a throwing arm injury, and went five innings. He gave up two hits, walked no one and struck out 10. Metts pitched the final two innings, giving up no hits, walking one and striking out two. He earned a save for his performance.
Jeff Davis got all the runs they needed in the second inning with a pair of runs.
Bubby Chaney led off the inning with a single and, an out later, went to second on a Garrett Taylor sacrifice bunt. Braydon Creech followed with a walk and Walters singled over the second baseman to score Chaney and move Creech to third. When Walters stole second, Creech raced home to up the score to 2-0.
The Jackets got their last run in the fifth as Metts doubled and scored on a Hayes single.
Backing up Hayes’ and Walters’ 2-hit, 1-RBI performances was Metts with a double and a single, and Chaney with a single.
In Tuesday’s 8-3 loss, a 5-run Raider fifth doomed the Jackets as five hits and two errors made the inning a disaster.
The Jackets’ first run came in the second as Creech was hit by a pitch with the bases loaded.
In the sixth, trailing 7-1, the Jacket bats came alive with three straight singles by Chaney, Taylor and Creech, the latter two coming on bunts, to load the bases. Walters then walked to score Chaney and Miles drove in Taylor with a sacrifice fly to left.
The Jackets had five hits, singles by Walters, Colby Marchant, Chaney, Taylor and Creech.
Miles took the loss on the mound, his first loss against seven victories. He went 4 1/3 innings, gave up six earned runs on 10 hits, walked none and struck out three. Cole Baucom pitched the final 1 2/3 innings, giving up one run on two hits, walking none and striking out three.
In Thursday’s 2-1 loss to the Raiders, the Jackets managed only one hit, a second inning solo homer by Metts. Jeff Davis led 1-0 until the bottom of the fifth when Bacon scored two to get the 2-1 win.
Matthew White started on the mound and threw three innings. He blanked the Raiders on three hits, walked one and struck out six. Taylor took the loss in relief. He pitched two innings, giving up two runs on three hits, walking none and striking out one. Creech pitched the sixth and retired the Raiders in order.
Score by innings:
JDHS 0 1 0 0 0 2 0 -3
BCHS 2 0 0 0 5 1 x -8