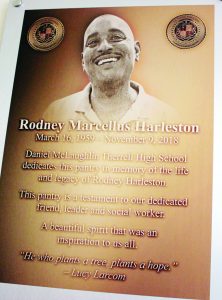 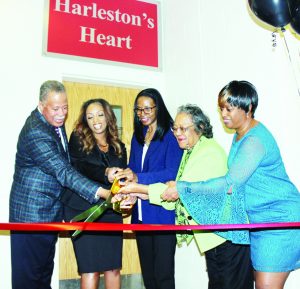 Housed on the first floor of Daniel McLaughlin Therrell High School, Harleston’s Heart is more than a pantry. It is a continuation of the legacy of beloved social worker Rodney Harleston, who lost his battle to cancer on Nov. 9, 2018.
“The closet’s inception was Principal Powell and Mr. Harleston’s idea for providing a means by which students and families who were in need of clothing items and food would have a place to come within the school to get what they needed,” said Dr. Josephine Barksdale, CTI coordinator/CTA department chair. “Harleston was more than a social worker. He would take the shirt off his back, the belt from his waist and give it to a child in need. He would go home and get stuff out of his personal closet for a young man. So, we wanted a way to continue his spirit of servitude.”
Some six years ago, Harleston began storing food, clothing and other students and community needs in a small broom closet. When he began soliciting items from the community, the pantry expanded from the closet to a classroom.
On March 29, Therrell held a ribbon cutting ceremony for the new space, affectionally called Harleston’s Heart.
Fellow social workers from across the District joined Therrell staff and students as Principal Powell, staff and community members spoke of Harleston’s impact on their lives.
“This gentleman who we’re honoring today is an unbelievable champion of generosity who gave himself so completely,” said the Rev. Anthony Motely of Lindsay Street Baptist Church. “I grew up with teachers like that and to know that they are still around warms my heart.”
Members of Harleston’s family, including his wife, mother and cousin, were also in attendance.
“We have been completely overwhelmed by the love and generosity we have received from everybody,” said Cheryl Harleston. “We all miss him, but today is about celebrating Rodney Marcellus Harleston – my husband, your friend, your coworker.”