Jeff Davis High’s jayvee baseball team fell 3-0 to Wayne County last Tuesday in Hazlehurst, took a pair wins over Statesboro in two 5-inning games in Hazlehurst Saturday and traveled to Fitzgerald Monday where they took an 11-2 win.
In the Wayne game, the JD Jackets out-hit the Wayne Jackets 7-6 but couldn’t get any runs across the plate, leaving eight runners stranded.
Conner Rea had a pair of singles, and Cam Williams, Andrew Aycock, Matthew Glass, Tyler Brewer and Trenton Clance each had singles.
Matthew White started on the mound and only one of the three runs he yielded were earned. He walked one and struck out six. Josh Griffin pitched the final inning, giving up no runs on one hit, walking none and striking out none.
In the first game against Statesboro, the Jackets went into the bottom of the fifth and final inning down 3-1 but they rallied for three runs to take the 4-3 victory.
In the fifth, Cole Baucom led off the inning with a walk and Layton Clance and Trenton Clance both singled to load the bases with no one out. With one out, Rea drew a bases-load walk to drive in Rea making it 3-2. Williams then lofted a sacrifice fly to center to drive in Layton Clance to tie the score 3-3. Aycock then hit a first-pitch single to left to score Trenton Clance with the winning run.
JD’s first run came in the third as Trenton Clance scored from third on a Williams sacrifice fly.
Williams had a single and two RBI, Aycock singled and had the game-winning RBI, White doubled, Glass, Layton Clance and Trenton Clance all had singles, and Rea had an RBI.
Williams went the distance on the mound, giving up one earned run on three hits, walking one and striking out five.
In the second game, the Jackets trailed 3-1 and rebounded with two runs in the third and fourth innings to take the win 5-3.
JD’s first run came in the second as Glass started the inning with a double, and courtesy runner Layton Clance went to third on a White single. He then scored on a wild pitch.
In the third, an error and a Ethan Hulett single put runners at second and third. Rea then scored Trenton Clance from third with a sacrifice fly and Hulett scored on a Williams sacrifice fly to tie the game 3-3.
In the fifth, White reached on an error advancing to second, went to third on a wild pitch and scored on a Dalton Sellers grounder to third as Sellers was safe on an error. Sellers scored later on a Hulett sacrifice fly.
Hulett had a pair of singles and an RBI, Glass doubled and White singled. Rea, Williams and Sellers each had an RBI.
Baucom was the winning pitcher in relief. He went two innings, blanking Statesboro on no hits, walking one and striking out four. Griffin pitched two innings, giving up one run on four hits, walking none and striking out none. Trenton Clance pitched one inning, giving up two runs on one hit, walking four and striking out none.
In Fitzgerald, the Jackets had nine hits and were aided by six Hurricane errors in taking the 11-2 victory.
Aycock paced the offense with a double, a single and an RBI. Become had a single and two RBI, Williams, Rea and Brewer each had a single and an RBI, and Hulett, Glass and Trenton Clance added singles.
Hulett picked up the win on the mound. He went five innings, giving up an unearned run on three hits, walked three and struck out five. Read pitched two innings, giving up one run on one hit, walking two and striking out two.
Score by innings:
WCHS 0 0 0 2 0 1 0 -3
JDHS 0 0 0 0 0 0 0 -0 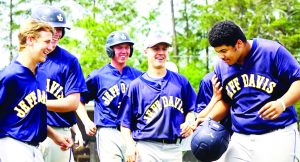 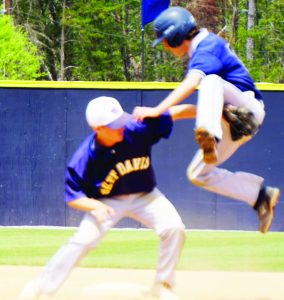