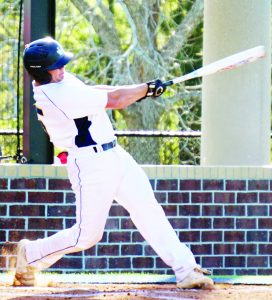 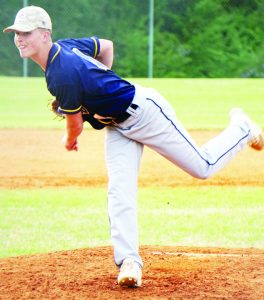 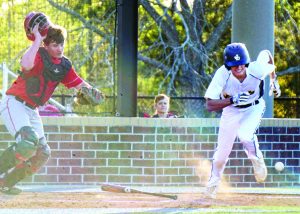 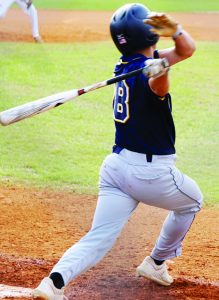 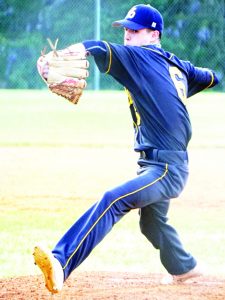 Braydon Creech closes out a game — Photo by Angie Hulett 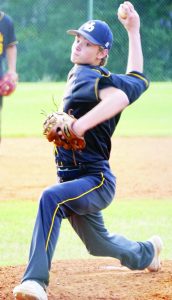 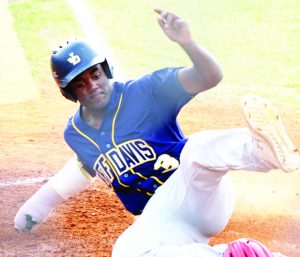 Jeff Davis High’s baseball team rebounded from its first region loss last Monday by downing Toombs County 4-0 Thursday in Hazlehurst and 9-3 Friday in Lyons. The wins upped the Jackets’ record to 16-2 overall and 8-1 in Region 2-AA.
Thursday in Hazlehurst, Garrison Miles started on the mound and scattered six hits through six innings and Braydon Creech preserved the shutout in the seventh, retiring the Bulldogs on seven pitches.
Colby Marchant had the hot bat with a pair of doubles and two RBI, Creech had two singles and an RBI, Garrett Taylor had a single and an RBI, and Miles, Caleb Leggett and Hamp Hayes added singles.
In the first innings, Taylor singled, went to second on a Miles sacrifice bunt, and scored on Marchant’s double.
JD added another run in the second, as Leggett walked, went to third on a Hayes single, and scored on Creech’s single.
The Jackets made it 3-0 in the fifth as Miles singled and Jashaun Kirby came on as a courtesy runner. Marchant then got his second double and Kirby scored all the way from first base.
Jeff Davis’ final run came in the sixth as Creech singled, Cade Walters walked and Taylor grounded into a fielder’s choice at second as Creech came in to score.
Miles improved his record to 5-0 as he walked only one batter and struck out four.
Friday in Lyons, the game was close until the seventh inning when Bubby Chaney blasted a grand slam home run to turn a 5-3 lead into a 9-3 victory.
Marchant started the seventh with a one-out single. With Ethan Hulett in to run for Marchant, Leggett singled and Kirby came on to run for Leggett. An out later, Hayes walked to load the bases. Then Chaney came to the plate and tagged the first pitch for a high homer over the right field fence.
The Jackets took a 2-0 lead in the first inning as Miles reached on an error, Taylor laid down a bunt single. Miles and Taylor moved to third and second on a Marchant fielder’s choice bunt that loaded the bases. An out later, Metts singled to score Miles and Taylor.
In the fifth, the Jackets staged a 2-out rally. Marchant reached on an error, Leggett singled, Metts reached on an error to drive in Marchant and courtesy runner Kirby. Hayes followed with a double to score Metts and make it 5-1.
Hayes had a double, a single and an RBI, Leggett had a pair of singles, Metts had a single and two RBI, Chaney had the grand slam homer, and Taylor, Marchant and Creech each had singles.
Metts started on the mound and took the win. He went three innings, giving up one run on three hits, walking none and striking out four. Leggett pitched the next three innings, giving up two runs on three hits, walking none and striking out none. Creech closed out the seventh, giving up a hit, walking none and striking out none.
Score by innings:
TCHS 0 0 0 0 0 0 0 -0
JDHS 1 1 0 0 1 1 x -4