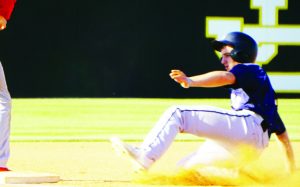 Jeff Davis High’s 6-game Region 2-AA win streak came to an end Monday in Lyons as Toombs County squeaked out a 4-3 win.
The Jackets out-hit the Bulldog 7-6 but couldn’t come up with hits at key times in the game.
Jeff Davis’ three runs came in the 5th inning. The Jackets entered the inning down 4-0. They scored three times to cut the score to 4-3 and had the bases loaded with only one out. But they couldn’t come up with the hit they needed and a pair of fly balls killed the threat.
Caleb Chaney opened the inning with a double to right and scored on a Hamp Hayes single. A bunt by Cole Baucom went too far and Hayes was thrown out at second. Cade Walters singled to left and Garrett Taylor singled to center to load the bases. Garrison Miles was hit by a pitch to drive in courtesy runner Conner Rea to make it 4-2. Colby Marchant then singled to score Walters. But two fly balls ended the inning with three runners left stranded.
A single, an error, a hit batter and two bases-loaded walks gave Toombs two unearned runs in the third. A hit batter, a double, a single and a sacrifice fly got the Bulldogs their other two runs in the fourth.
Walters had a pair of singles, Chaney doubled, Marchant and Hayes both had a single and an RBI, Taylor and Caleb Leggett singled, and Miles drove in a run.
Walters started on the mound and took the loss, lasting 2 1/3 innings. He gave up two unearned runs on three hits, walked one, hit three batters and struck out none. Baucom pitched 2 2/3 inning, giving up two runs on two hits, walking one, hitting one and striking out four. Braydon Creech pitched the final innings, blanking Toombs on a hit, no walks and no strikeouts.
Score by innings:
JDHS 0 0 0 0 3 0 0 -3
TCHS 0 0 2 2 0 0 x -4