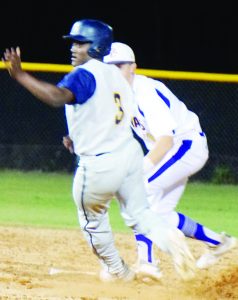 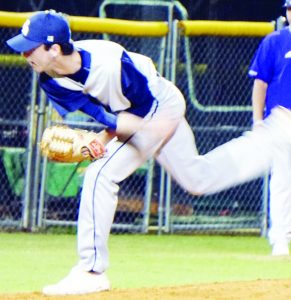 Jeff Davis High’s baseball team played only one game last week, defeating Bleckley County 4-3 Tuesday in Cochran, as a Saturday doubleheader with Cairo was rained out.
The Jackets went into their Tuesday game (originally scheduled for Monday) with Metter without playing a game in a week.
The Metter game was the first of a 3-game, Region 2-AA series. The remaining two games are scheduled for Thursday in Metter and Friday in Hazlehurst.
In Cochran last Tuesday, the Jackets got on the board first with a 2-run second inning. Jashaun Kirby started things by reaching first on an error and going to second on a Caleb Leggett sacrifice bunt. With two outs, Caleb Chaney singled, moving Kirby to second. Kaden Lewis singled to center sending Kirby across the plate for a 1-0 lead. Cade Walters then singled to left, scoring Chaney from second to make it 2-0.
Bleckley got a run in the bottom of the inning to cut the lead to 2-1.
The Jackets added a run in the top of the third as Colby Marchant doubled and courtesy runner Ethan Hulett scored on a line drive single by Leggett.
Bleckley came back to tie the game 3-3 with a pair of runs in the bottom of the fourth.
In the top of the seventh, the Jackets got the go-ahead run. Marchant flied to left and reached second on a two-base error by the left fielder. Kirby followed with a liner to left, driving in Hulett from second base.
In the bottom of the inning, Bleckley got the tying run on second with two outs but the final batter popped up to Britt Metts at short to end the game.
Chaney had a pair of singles to lead the batting. Marchant doubled, Kirby, Leggett, Lewis and Walters all drove in a run with a single, and Garrison Miles added a single.
Leggett started on the mound, giving up three runs on seven hits, walking four and striking out four. Creech picked up the win in relief, going three innings and blanking Bleckley on three hits, a walk and three strikeouts.
Score by innings:
JDHS 0 2 1 0 0 0 1 -4
BCHS 0 1 0 2 0 0 0 -3