Turkey Vulture aka The Buzzard
As I travel back and forth to the Jeff Davis Primary School with my daughter, I too have noticed what Mr. Purser and others see every day; the water tower and its looming cronies. In my three years here in Jeff Davis County I have seen them come and go from this favored perch. But why are the vultures there? Are they eating something? Do they have a nest nearby? Is someone luring them there to make Hazlehurst an unattractive place to live? Though all of those ideas may be plausible, they are likely far from the truth.
The turkey vulture and the black vulture are the common vultures in North America. Known more commonly as buzzards these very large birds are different in appearance and habits. We often get annoyed by buzzards, but if you think about it, they provide a very necessary service. As scavengers they consume the carcasses of dead animals and recycle nutrients and clean up our environment. “Vulture” means “tearer” in Latin and is quite descriptive of how the birds tear apart their food. They lack a syrinx and therefore cannot sing or call like other birds but they can make low grunts and hissing sounds.
Turkey vultures are brownish black in color and their heads are bare of feathers and bright red as adults. Most weigh 4 to 5 pounds are 25 to 32 inches tall and have a wingspan of up to 6 feet. The trailing of the underside of the wing is grey and the rest is black. In flight you will notice that they have a longer tail than the black vulture and they glide more than they flap their wings. Turkey vultures forage by smell a habit that is very rare in the bird world. They detect the smell of the gas byproducts of decomposition and are often the first to arrive to a carcass.
Black vultures are black with featherless dark gray heads. Adults weigh 4 to 5 pounds with a wingspan of about 5 feet. The underside of each wing tip has a patch of white feathers. Feet and beaks are also dark gray. Their shorter wings mean they flap more than turkey vultures and have shorter tails. Black vultures use sight to locate food items and often follow turkey vultures to food. Both turkey and black vultures are native but you will get some migration from northern populations heading south for the winter.
Vultures are able to ingest large amounts of bacteria without any harm. By getting rid of carcasses they prevent the spread of disease through the pile up of rotting material. However they can spread things on their feet and feathers. Stomach acids in the bird destroy all disease causing organisms to prevent passing anything to humans or livestock. Nesting occurs in the spring in thickets, on rock ledges, in abandoned buildings and hollow logs. They usually lay two eggs that will hatch in 40 days. Both parents share roles of caring for young for the first two to three months. Vultures roost communally with other species of vultures and in large numbers of their own species. Which is what we see in the case of the water tower. Roosting from fall to early spring gives them the ability to find potential mates and food while protecting themselves from predators. Vultures can become a great nuisance by damaging property. Their droppings are very acidic and can corrode metal surfaces. They have also been known to damage the roofs of houses and the paint on cars. In most cases they feed on the carcasses of things that are already dead but from time to time you will have damage to livestock from black vultures. Feeding on sick or newborn animals can occur.
Control of vultures is very difficult. They are protected under the Migratory Bird Treaty Act and may not be killed without a permit. To rid yourself of vultures you can modify the area to make it uncomfortable for the birds. Electric fence wire on roosting perches or perches that roll or move to knock them off when they land have been known to work. Frightening the vultures is one of the best methods. Make a replica of a dead vulture carcass or obtain a permit to kill a real bird. Then hang the dead vulture upside down near the roosting site and they will usually leave the area in about 5 days. Clean up areas where nesting sites could be and eliminate food sources to discourage their congregation as well. For assistance with dispersal call USDA APHIS Wildlife Services at 706-546-5637. Several places struggle with the same issue with vultures and often the birds do win the battle. As the old adage says “If you can’t beat um, join um”. In Perry, Georgia they started celebrating the appearance of the buzzards. Every year on New Year’s they have the Buzzard Drop to count down to the New Year, which I find creative and comical.
For more information on agriculture or natural resources please contact me, Jennifer Miller, at the Jeff Davis County Extension Office: 912-375-6648. Or visit us online at: http://extension.uga.edu/county-offices/jeffdavis.html or subscribe to the Plow Points Ag Blog: http://blog.extension.uga.edu/plowpoints/ 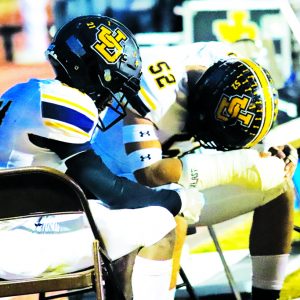