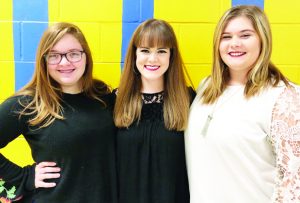 The Jeff Davis High School Band and Band Director Charles Westman congratulate Abby Toler, Shelby Kerns, and Shelby Kertz on their acceptance to the Georgia All-State Honor Band tto be held at the Classic Center in Athens Feb. 28-March 2. This is the first time in Jeff Davis High School Band history that three students have been accepted in one year to perform at this prestigious event. Former band director Tom Brown states, “Just for a little perspective, the All-State Instrumental audition process begins with nearly 10,000 students auditioning first round representing 13 districts that cover the entire state. From that, only about 2,500 make it to second round. From that, only 510 students earn a position in an All-State Band or Orchestra. Of that number, only 37 were from out of the metro Atlanta area. Three were from Jeff Davis. These kids just won the state championship in band. Kind of awesome. Congratulations to the students and director.” We are extremely proud of all the hard work and dedication these students have put into their music studies and wish them continued success.