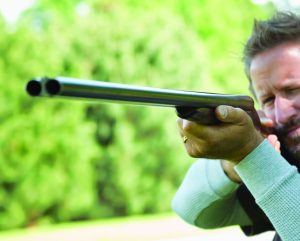 Members of the Jeff Davis County Board of Education want to arm students ….. in a safe, responsible manner through participation in the USA High School Clay Target League.
At Monday night’s board meeting, the proposal of establishing a clay target team at Jeff Davis High School was suggested by Board member Andy Ramay and heartily endorsed by JDHS Principal Chris Roppe.
Both had done research on the organization which began in 2001 with a mere 30 young shooters in grades six to 12. Today, there are just over 800 teams in 26 states with over 26,000 youth participating on teams of five or more shooters.
Regulations to participate in the league, which oversees high school trapshooting and skeet shooting in over 20 states, include that teams must be school-sanctioned with strict coach-to-shooter ratios as a safety factor. The Clay Target League’s motto is “Safety, Fun, Marksmanship – in that order.”
There are no member schools in Georgia, meaning Jeff Davis High would be the first school in the state to affiliate with USA High School Clay Target League. In order for Georgia to become a league member state, there must be five schools in the state to participate. Since there are already various youth shooting organizations in the state — such as rifle teams and 4-H shooting activities — getting four more schools to join JDHS should not be a problem.
Ramay explained that team members would shoot locally for nine weeks in 25-shot segments. They would then upload their scores to the league’s web site and the results over the nine weeks would be used to organize tournaments.
The costs for the program — clay targets, shotguns, ammunition, etc. — would be paid by parents interested in introducing their children to the sport and having them taught important firearm safety rules.
At Monday’s meeting, Roppe introduced high school math teacher Cindy Morris, an avid shooter, who has agreed to oversee the local program for the first year.
During discussion on the matter, Ramay pointed out that league officials said a high percentage of student participants nationwide are not involved in any other extracurricular activities at their schools. Roppe added that it’s another way to keep students involved in activities.
Board member George Gainer, a trapshooter himself, was enthusiastically in favor of the program, adding jokingly that there are a lot of kids driving around the county in 4-wheel drive pickup trucks who would love to participate.