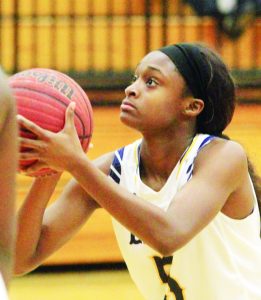 Jeff Davis High’s girls won a pair of games last week, defeating Toombs County Tuesday in Lyons 46-43 in overtime and downing Metter at home Friday 47-39.
Against Toombs, the Lady Jackets trailed throughout most of the first half, and trailed 21-16 at intermission. In the second quarter, JD had problems with their inside game and scored their six points in that quarter on 3-point shots by Jakhia Green and Keke McDuffie.
The Lady Jackets outscored Toombs 15-9 in the third quarter to take a 31-30 lead with eight minutes to play. The Lady Bulldogs fought back to tie the score 39-39 at the end of regulation.
In overtime, McDuffie hit her third 3-pointer of the game, scoring five of her team’s seven overtime points to key the victory.
McDuffie’s 13 points led the JD scoring with Jazmine Johnson and Dee Wooten joining her in double digits with 12 and 10 respectively. Jakhia Green added six and FeFe Green five to round out the scoring.
L.K. Mobley led all scorers with 18 for Toombs while Ashanti Campbell pitched in 10.
The Lady Jackets outscored Metter in every quarter Friday night as they took their eight point win.
Wooten led the scoring with 14, Johnson was in double figures with 10, Morgan Yearty and FeFe Green had five each, and Jakhia Green, Tia Cornish and McDuffie had four each.
S. Johnson topped Metter with six points.
Score by quarters:
JDHS 10 6 15 8 7 -46
TCHS 11 10 9 9 4 -43