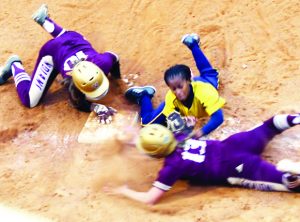 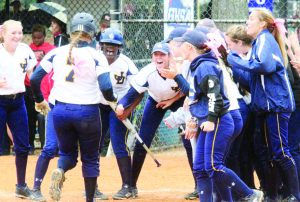 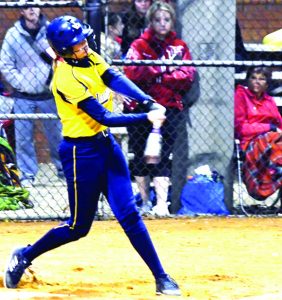 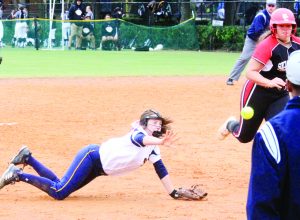 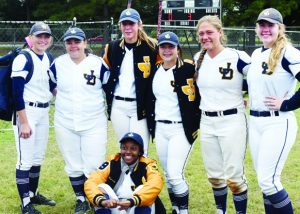 Jeff Davis High’s Lady Jacket softball team advanced to the final four teams at last week’s Georgia High School Association Championship Tournament in Columbus.
The Lady Jackets lost their opening game to eventual champion Social Circle 12-5, then won back-to-back, bottom-of-the-7th thrillers over Vidalia 6-5 and Dodge County 8-7 in the losers bracket, before being eliminated by Monticello 6-1. Monticello then fell to Banks County 5-2 and Social Circle topped Banks County in the finals 9-1.
The Lady Jackets finished the season with a 26-11 record.
In the Lady Jackets’ opening game, Social Circle showed why it would eventually emerge as State Champions as the Lady Redskins tagged three Jeff Davis pitchers for a season-high 18 hits.
Social Circle came out swinging the bats, scoring five runs in the first inning. But the Lady Jackets didn’t lay down and quit. Karli Williams hit a 2-run homer in the bottom of the first and Jeff Davis added two more runs in the bottom of the third on a 2-run double by Marlee Colson to pull within 5-4. But the Lady Redskins scored two in the fourth and added five insurance runs in the top of the seventh to seal the Lady Jackets’ fate.
Colson led Jeff Davis at the plate with two doubles and three RBI. Williams had the 2-run homer, Paige Carter tripled, and Jakhia Green and Dee Wooten both had singles.
Lanie Scott took the loss on the mound. She went 5 1/3 innings, giving up five runs on 11 hits, walking two and striking out one. Cara Edwards pitch 2/3 innings, giving up two runs on four hits, walking none and striking out none. Lindsey White threw one inning, giving up two earned runs on three hits, walking one and striking out none.
Carter had the Lady Jackets’ only stolen base.
The Vidalia game was the fourth meeting of the season between the two Region 2-AA schools, all won by Jeff Davis. And the Lady Jackets’ 6-5 win was the third straight 1-run win Jeff Davis had over Vidalia.
It wasn’t easy as the Lady Jackets went into the final inning on the short end of a 5-3 score.
JD loaded the bases in the bottom of the seventh with Amillian Clements, who was pinch running for Williams, on third, Jakhia Green on second and Dee Wooten at first.
Paige Carter came to the plate and ripped a single to score Clements and Green and Wooten came home on a Vidalia error as Jeff Davis snatched victory from the jaws of defeat.
The Lady Jackets were out-hit 10-4 but took advantage of six walks. Williams, Wooten, Carter and Colson each had singles. Carter had three RBI, Colson two and FeFe Green one.
Scott was the winning pitcher. She gave up four earned runs on 10 hits, walked two and struck out three.
The Lady Jackets faced one of their more formidable opponents of the year in powerful Dodge County and the game turned into a 9-inning thriller. The game started out as if the Lady Indians would route Jeff Davis as Dodge score three runs in each of the first two innings to jump out to a 6-0 lead.
But after that, Scott, Edwards and Kesleigh Poe limited Dodge to a single run over the final seven innings.
A big 6-run fifth inning wiped out Dodge’s lead as FeFe Green and Caroline Waters both had 2-run triples, and Williams and Bianca Torres both drove in a run. Three scoreless innings followed and the teams went into the ninth tied 6-6. In the top of the inning, Dodge scored an unearned run to go up 7-6.
In the bottom of the seventh, Colson came to the plate with one teammate on base. She promptly drilled a home run to lift the Lady Jackets to the 8-7 win.
Carter had a double and a single to lead the Jeff Davis batting. Colson had the 2-run homer, FeFe Green and Caroline Waters both had a triple and two RBI, Williams had a single, a sacrifice and an RBI, Torres singled in a run, and Wooten, Karlie Watson, Jakhia Green and Clements each had a single.
Scott picked up the win in relief. She pitched three innings, giving up an unearned run on four hits, walking two and striking out one.
White pitched two innings, giving up four earned runs on seven hits, walking one and striking out none. Edwards pitched three innings, blanking Dodge on two hits, a walk and a hit batter. Poe pitched one inning, giving up no runs on one hit, a walk and a strikeout.
The loss to Monticello was a close game through four innings as Jeff Davis trailed only 2-1. But the Lady Hurricanes scored two in the fifth and sixth to open a 6-1 lead and the final inning magic didn’t come through for the Lady Jackets.
Waters had a pair of singles and a stolen base to lead the offense, Wooten doubled and Scott singled in Wooten with Jeff Davis’ only run.
Scott took the loss on the mound. She went 6 1/3 innings, giving up five earned runs on nine hits, walking two and striking out five. Lindsey White retired the only two batters she faced as she closed out the top of the seventh.
Score by innings:
SCHS 5 0 0 2 0 0 5 -12
JDHS 2 0 2 0 0 0 1 – 5