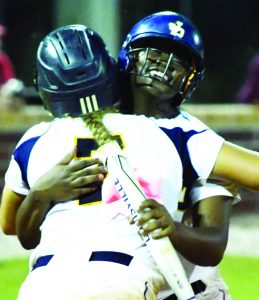 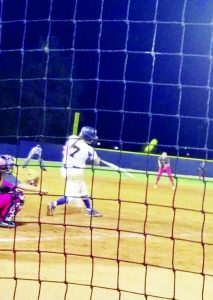 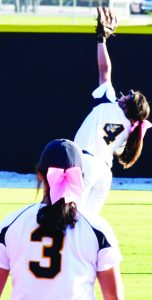 Jeff Davis High’s softball team swept Berrien County Wednesday, 10-3, 6-1, to earn a position in the 8-team State Tournament Finals in Columbus this week.
The Lady Jackets, 24-9, will face Social Circle, 16-11, at 3 p.m. Thursday.
Other games Thursday at 3 p.m. are Harlem, 27-4, vs. Banks County, 26-8; Heard County, 23-7, vs. Dodge County, 28-4; and Vidalia, 23-10, vs. Monticello, 18-6.
The State Tournament will be Thursday through Saturday. A victory in the Lady Jackets’ opener will put them in a 9 p.m. game Thursday against the Vidalia-Monticello winner, a loss will drop them to a 12:00 game Friday against the Vidalia-Monticello loser.
In the series against Berrien County, the first game was an easy win for the Lady Jackets while the second game took some late inning heroics for JD to pull out the win.
Pitchers Lindsey White and Lanie Scott gave up just five hits in 14 innings of work on the mound while the Jeff Davis offense pounded out 21 hits
In the 10-3 opening game win, Jeff Davis led 10-1 after three innings and the game was never seriously in doubt. In the 6-1 final game, Berrien took a 1-0 lead and held that advantage until the top of the fifth when the Lady Jackets tied the game 1-1. A two-run sixth inning put JD in front and senior catcher Karli Williams rapped a line-drive, 3-run homer in the top of the seventh to seal Berrien’s fate.
In the first game, Karlie Watson had a trio of singles, stole a base and drove in two runs to lead the offense. Dee Wooten singled and doubled and drove in two runs, Scott had a single, a double and an RBI, Paige Carter had a single, a sacrifice and an RBI, Marlee Colson singled twice, and Williams singled in a run.
White was the winning pitcher. She started on the mound and went 4 1/3 innings, giving up two earned runs on three hits, walking three, hitting two and striking out two. Scott earned a save pitching the final 2 2/3 innings, no-hitting Berrien, walking one and striking out one.
In the nightcap, Williams led the Lady Jackets at the plate with a single, a homer and three RBI. Wooten singled and doubled, Carter singled twice, Colson and FeFe Green both drove in a run with a single, Scott and Watson both singled, and Bianca Torres had a pair of sacrifices.
Scott pitched a complete-game 2-hitter and Berrien’s only run was unearned. She walked two and struck out four.
Score by innings:
BCHS 0 0 1 2 0 0 0 – 3
JDHS 4 0 6 0 0 0 x -10