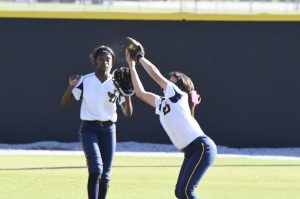 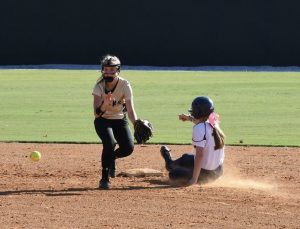 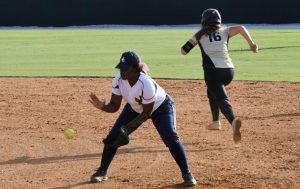 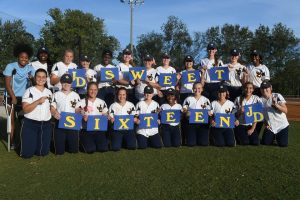 While the Jeff Davis High-Washington County High first round playoff series was delayed last week by tropical storm Michael, the Lady Jackets finished their sweep of the Lady Hawks with a 7-1 victory Friday in Hazlehurst.
Jeff Davis opened the series last Tuesday with a 16-0 victory after which rain prevented the second game from being played.
Tuesday’s game was over in 2 1/2 innings as the Lady Jackets scored 14 runs in the second inning to take the 16-0 lead.
Jeff Davis got its 16 runs on just eight hits and were helped along by eight free passes and Washington County errors.
Karli Williams led the way with two doubles and four RBI, Marlee Colson had a single, a sacrifice and three RBI, Paige Carter singled twice and drove in two runs, Caroline Waters had a single and two RBI, Lanie Scott had a single, a sacrifice and an RBI, FeFe Green singled in a run, and Dee Wooten had a sacrifice and an RBI. FeFe Green, Jakhia Green and Karlie Watson all had stolen bases.
Lindsey White was the winning pitcher. She blanked Washington County on one hit, walked three, hit one batter and struck out none.
While Friday’s game got off to a slow start with two scoreless innings, the Lady Jackets scored seven runs over the next two innings to take a 7-0 lead.
Washington County’s only run came on a bases-loaded balk.
Carter had the hot bat for the winners, going 3-for-3 with a trio of singles and two RBI. FeFe Green had a single and a double, and stole a base, Williams drove in two runs with a single, Bianca Torres had a single, a sacrifice and an RBI, Colson had a single and an RBI, Jakhia Green and Waters both singled and stole a base, and Scott drove in a run.
Scott pitched the first four innings and picked up the win. She gave up an unearned run on four hits, walked one and struck out three.
Kesleigh Poe pitched two innings, blanking the Lady Hawks on two hits, walking none and striking out one. White closed out the final inning and retired all three batters she faced.
The Lady Jackets (22-9) play Berrien County today (Wednesday) in Hazlehurst in the second round. Berrien (19-8), the No. 2 team from Region 1-AA, defeated Jefferson County 13-5, 17-0 last Tuesday.
In other playoff games last week, Metter lost to Bleckley County 10-1, 14-4; Vidalia topped East Laurens 8-0, 7-5; Bacon County lost to Dodge County 8-0, 11-2; Chattooga swept Therrell, 15-0, 20-0; Social Circle downed Callaway 9-5, 12-1; Harlem eliminated Thomasville 11-3, 5-2; Banks County won in three games over Bremen, 8-2, 4-5, 14-0; Rockmart rolled over Douglass-Atlanta 20-0, 23-0; Monticello topped Lamar County 18-4, 11-9; No. 4 seed Pepperell beat No. 1 seed South Atlanta, 12-0, 19-0; Heard County survived over Union County 4-6, 8-3, 10-5; Dade County blasted Washington-Atlanta 19-0, 12-0; and Brooks County downed Screven County 9-8, 11-2.
Due to tropical storm Michael, the Fitzgerald-Westside Augusta series was postponed until Monday.
Score by innings:
WCHS 0 0 0 – 0
JDHS 2 14 x -16