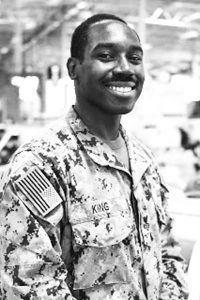 A 2005 Jeff Davis County High School graduate and Hazlehurst native is serving at the Fleet Readiness Center Southwest, based at Naval Air Station North Island, San Diego.
Petty Officer 1st Class Robert King is a Navy aviation electronics technician responsible for repairing the communication, navigation and other integral parts of an aircraft.
“I like knowing that I can take something that is broken and fix it,” said King. “We’re a very technical rate and get to play with the latest and greatest gear.”
King credits success in the Navy to lessons he learned growing up in Hazlehurst.
“I learned tolerance in Hazlehurst,” he said. “It taught me to keep an open mind. I went to a semi-diverse school. It helped with my patience and communication, valuable skills to have in the Navy.”
FRCSW traces its heritage to 1919, when the Navy began repairing aircraft at what is now known as Naval Air Station North Island. Since its humble beginnings almost a century ago, the facility has been at the forefront of weapons system sustainment, providing innovative naval aviation maintenance solutions utilizing the latest technologies.
Today, as the Navy’s premiere west coast Maintenance, Repair, and Overhaul (MRO) facility, FRCSW specializes in the maintenance, engineering and logistics support for a wide range of high-performance aircraft, servicing more that 225 airframes and 35,000 components annually.
“The standard that they set at this command is something that I strive to meet and maintain,” King said.
FRCSW provides world-class support to Navy and Marine Corps tactical, logistical and rotary wing aircraft and their components, by utilizing state-of-the-art management systems.
To provide maintenance excellence where it’s most needed, FRCSW maintains field sites at Naval Base Ventura County — Point Mugu, Marine Corps Base Camp Pendleton, and MCAS Miramar in California, MCAS Yuma, Arizona, MCAS Kaneohe Bay, Hawaii, NAS Whidbey Island Washington, as well as in Okinawa and Iwakuni, Japan.
Serving in the Navy is a continuing tradition of military service for King, who has military ties with family members who have previously served. King is honored to carry on that family tradition.
“My brother is retired Air Force, my dad is retired Air Force and my mom is retired Army,” said King. “I joined the Navy to break the cycle.”
King’s proudest accomplishment has been perseverance: “I’ve been in the Navy for 13 years,” he said. “It hasn’t always been easy and I’m proud that I’m still here. I just kept pushing and pushing.”
As a member of the U.S. Navy’s aviation community, King and other FRCSW sailors know they are a part of a legacy that will last beyond their lifetimes providing the Navy the nation needs.
“I have served my command in a manner that has fostered trust in my ability to lead and take care of my sailors,” said King. “Serving in the Navy means I’m part of something that I can always fall back on, and that I’ve got friends, brothers and sisters that I can fall back on for support. It’s real nice.”